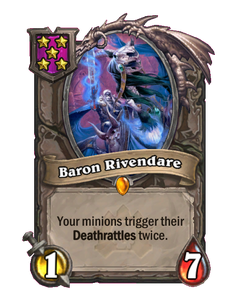 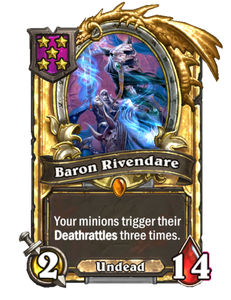 There used to be five Horsemen but one of them left because a job opened up in the deadmines and the benefits were better.

Baron Rivendare is a Tier 5 minion in the Battlegrounds game mode.

Baron Rivendare is one of a number of build-around cards that become available at Tavern Tier 5. His effect of doubling your minion Deathrattles means that he can represent immense value and threat if correctly protected. He has very good synergy with minions like Kaboom Bot or Selfless Hero that impact the board upon death, as his effect stacks with the Golden versions (i.e. a Golden Selfless Hero will grant two Divine Shields, but if Baron is on board, she will grant four). He also works well in builds that can benefit from token and minion summoning, such as with cards like Mechano-Egg, Sneed's Old Shredder or Ghastcoiler. As a result, Baron Rivendare can be a natural fit in a Mech build running Kangor's Apprentice and Deflect-o-Bot, along with the aforementioned cards.

Combined with Unstable Ghoul, damage would be dealt repeatedly on all minions, you can let it kill your Kaboom Bot and Kangor's Apprentice, or Rat Pack and Goldrinn, the Great Wolf, making huge value while counter opponent's strategy.

Because of his powerful effect, he is best placed in a position where he is attacked, and attacks, last, such as the far right. However, keep in mind Cleave effects (such as that of Foe Reaper 4000) and play around these accordingly.

Beware of Zapp Slywick, as he will immediately snipe your Baron if you don't have any other minions with 1 or less Attack. This is a noted vulnerability of builds running Baron Rivendare. Buffing his stat even a little will help prevent him from dying - tripling him, using Hero Powers or some non-tribal buff like Cobalt Scalebane and Lil' Rag all work. You can add in a low-Attack filler minion like Micro Mummy to redirect Zapp's attack. Even a single 1-Attack minion has a 50% chance to redirect him away from an unbuffed Baron. Deadly Spore and Maexxna are strong counters against Zapp.