Hearthstone Wiki
Register
Don't have an account?
Sign In
Advertisement
in: Battlegrounds cards subpages, Pages with no result queries, Mechanicals 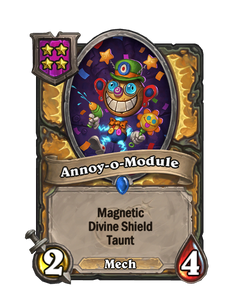 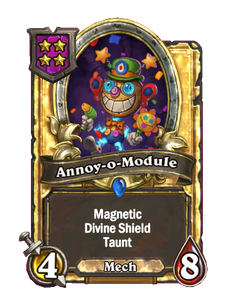 Every ten seconds it asks if you want to update.

Annoy-o-Module is a Tier 4 minion in the Battlegrounds game mode. 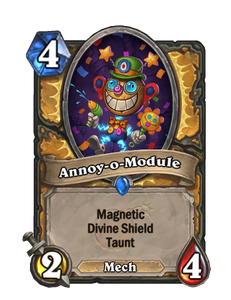 Even in non-Mech compositions, Annoy-o-Module is a solid midgame pickup, as it provides you with a strong minion to contest that part of the game. It is especially effective when combined with Security Rover or Mechano-Egg from the same tier, although even weaker mechs like Harvest Golem and Kaboom Bot make decent minions with Annoy-o-Module. It is worth buying Annoy-o-Module even if you do not have a Mech to magnetize it onto yet, as the buff it provides is significantly powerful. That said, Annoy-o-Module has a weak body on its own and is rarely worth playing onto the board by itself.