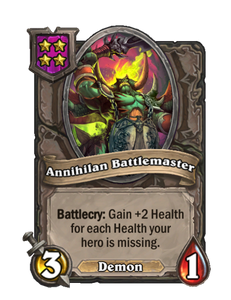 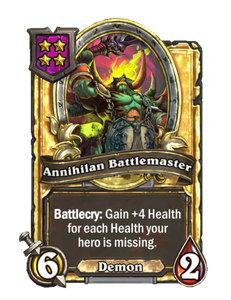 Annihilan Battlemaster is a Tier 5 minion in the Battlegrounds game mode.

Annihilan Battlemaster is a mighty late-game powerhouse especially for Demon warbands, which tend to deal large amounts of self-damage while building up their minions' stats. When played at low health, it will boost itself to enormous health totals, although its low starting Attack keeps its power in check. As such, this card needs Attack buffs like Nathrezim Overseer and Lightfang Enforcer to start trading blows effectively. Patchwerk can make better use of this card than most heroes due to his higher starting health total.

A triple of this card normally means a great advance for the warband, and make sure you play two of them before grabbing a third. Not only does a golden Battlemaster gain double your lost health, but it will also incorporate the health gained by the two regular copies you played, easily boosting its health to astronomical levels and making it virtually unkillable by anything other than Poisonous minions. Brann Bronzebeard likewise has incredible synergy with this card; if you manage to play a golden Annihilan Battlemaster with Brann on the board, it may easily win combat by itself.

The power of a Battlemaster may be thought as the product of its Attack and Health if Attack is not sufficiently high. When Attack is too low, it has to take damage multiple times to kill a minion, making its Health less effective.

This minion can be placed adjacent to your taunt minions to tank cleave damage that would otherwise kill other valuable minions.