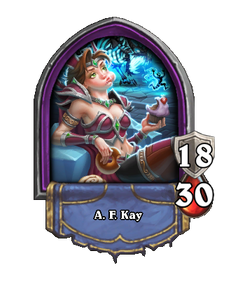 A. F. Kay is only sometimes on time to help her allies when they need her, but somehow always there to land the final blow and claim the glory.

A. F. Kay is a hero that the player can pick in the Battlegrounds game mode. 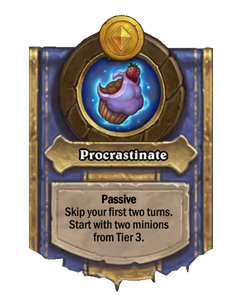 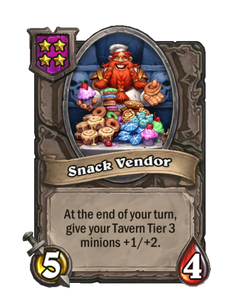 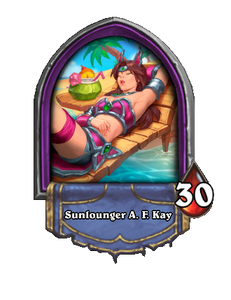 A. F. Kay starts with no Coins for the first two turns, so all she can do is receive damage and Freeze the Tavern. However, the benefit of being able to Discover two Tier 3 minions on her third turn gives her an incredible spike in early-game power to offset both her board and Tier disadvantage. Because A. F. Kay's starting minions will in all likelihood be much stronger than anything her opponents have, she can afford to be more aggressive with her Tavern upgrades.

Look for token generators like Alleycat, Murloc Tidehunter or Sellemental on the first two turns, and freeze only if they are found. On turn 3, you can buy that minion, play it, and then sell the token to upgrade Tavern on the same turn while also getting an extra body on the board.

Choose minions with either good stats or potential synergies. Minions like Bronze Warden and Deflect-o-Bot are great examples of good stats on board. As for possible synergies, you can choose minions like Khadgar (if you are offered token generators by the tavern) or Soul Juggler (if you are offered any type of demons). Avoid choosing buff cards unless you aren't offered any better cards or already have some kind of synergies.