Battle of the Bans

"Pick four cards. Your opponent will BAN one of them, then we'll make you a deck full of the cards remaining."

Battle of the Bans is a Tavern Brawl. It debuted on March 20, 2019. For exact times, see the schedule.

This Tavern Brawl sees players doing battle with custom decks composed solely of four cards. When the game starts, the opponent choose one card to ban (the opponent will see only three cards of your deck, the fourth one will be a hidden card) and a deck with 10 copies of the other three cards will be made. Banned cards in your hand will be replaced with one of the three unbanned cards. 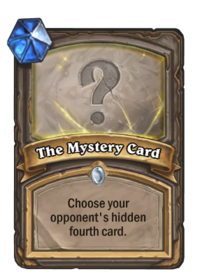 You want to build a deck where all the cards synergize with each other, but it each one is interchangeable. One easy way to do this is to use two sets of cards that both accomplish similar things. Here are a few examples: