Difference between revisions of "Battle of Tol Barad" 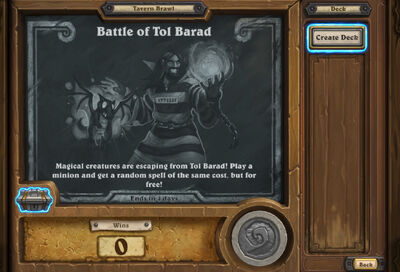 "Magical creatures are escaping from Tol Barad! Play a minion and get a random spell of the same cost, but for free!"

Battle of Tol Barad is a Tavern Brawl. It debuted on November 25, 2015. For exact times, see the schedule.

Additionally, Battle of Tol Barad was one of nine Tavern Brawls featured as part of the 207th Brawl, The 207th Brawl Spetacular!.

This Brawl sees players creating their own custom decks using any class. Each time a minion is played, a random spell of the same mana cost will be generated for the player, with the spell's cost reduced to 0. Spells may be of any class, and are not affected by the player's class.

Playing minions on curve can be crucial, since it is good to have a spell each turn. Druid is a good class to select for this, since with Innervate and Wild Growth a big minion can be easily played, allowing a powerful spell to come along with the big minion.

Spells in the constructed deck should probably be restricted to only what is absolutely necessary. Normally superb spells like Fireball will simply fall behind the value of a 4 mana minion and its free spell.

Try to include minions that can take advantage of the many free spells you will accumulate. Flamewaker, Questing Adventurer, Gadgetzan Auctioneer, Summoning Stone, and Archmage Antonidas will all benefit from a large supply of free spells. You could also include counters to the rampant spell use, such as with Troggzor and Loatheb.

Another great strategy is to go with Priest and Embrace the Shadow or Auchenai Soulpriest, Bolf Ramshield, and a 0-cost Tree of Life will grant you a 100% chance to win the game, because if you would take 30 damage, Bolf intercepts it and you stay alive. (Old, now no longer Standard). 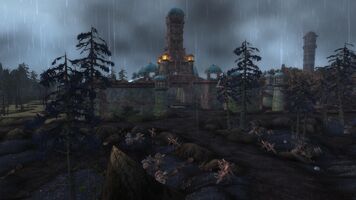 The prison island of Tol Barad in World of Warcraft

Tol Barad is an island kingdom off the coast of Gilneas. Housing the mystical prison fortress of Baradin Hold, the central island is hotly contested by the Alliance and the Horde. But beneath the crumbling ruins something sinister is stirring, driving the prison's guards to madness and murder, as unholy forms stalk the island.

Tol Barad was added in Cataclysm as a PvP zone and questing hub. The island's peninsula provides a range of daily quests and PvE challenges, while the central island is a dedicated and persistent PvP zone, opened at regular intervals for battle between the two factions. Whichever faction currently controls the island gains access to the Baradin Hold raid and special vendors, as well as additional daily quests.

More than one thousand and two hundred years ago, Arathor built the citadel of Tol Barad. During the Second War, Tol Barad was a strategic staging area for Alliance forces. The Horde viewed Tol Barad as an obstacle in their path to the Eastern Kingdoms and mounted an assault on the island. Unprepared for such aggression, the Alliance were expelled from Tol Barad and the citadel was razed, a charred symbol of the Horde’s brutal victory. Some of the original Stromic population remained. 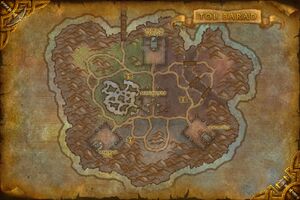 Following the Second War, what remained of the blackened, derelict battlements was left to languish until the wizards of Kul Tiras claimed the isle for a new purpose. Towering walls were again stacked high from the war-scarred stones, but in their cleverness, the arcanists turned the citadel’s defenses inward, designing a mystical prison to hold the most powerful criminals. Serving the Tirasian magi, the Stromic population formed the Baradin's Wardens: charged with ensuring that the deadly prisoners locked away in the mystic Baradin Hold never again walk free on Azeroth. Even the Kirin Tor imprisoned some powerful demons in the repurposed stronghold.

When Stromgarde started to suffer a series of catastrophes, the town of Rustberg was abandoned as its population were recalled home. This settlement later became the base of a group of pirates that struck the towns along the shores of Baradin Bay.

With the Cataclysm Tol Barad once again became a battleground between the Horde and the Alliance. Warchief Garrosh Hellscream sent the elite warriors known as Hellscream's Reach to the island, charged with taking it from the humans. Defending it against them were the Baradin's Wardens, the army that originally guarded the prison. However, as the two forces fought for supremacy over the island, something sinister was taking over the prison fortress of Baradin Hold and the whole island in turn, with prison guards murdering each other or letting their charges free, insanity amongst Alliance soldiers, undead corpses rising from their graves, and spirits reliving their final battles.