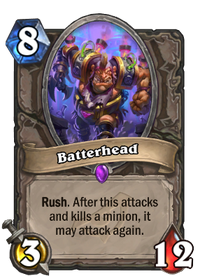 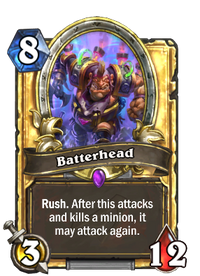 Rush. After this attacks and kills a minion, it may attack again.

When it comes to problem-solving, he always uses his head.

Batterhead is an epic neutral minion card, from the Rise of Shadows set.

Batterhead can be obtained through Rise of Shadows card packs, or through crafting.

Batterhead is best against flood - type decks such as token druid. It can be used as a budget Baron Geddon. Play it when the opponent has nearly a full board for maximum value.

Batterhead is unique to Hearthstone. He is one of the henchmen of the League of E.V.I.L., and while not very smart, he has a very thick head and serves as the muscle of the operation.[3]