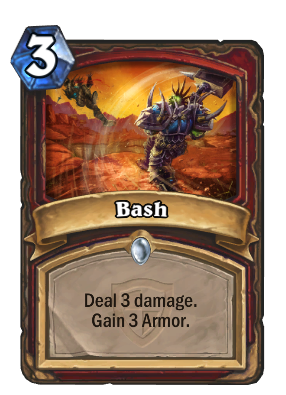 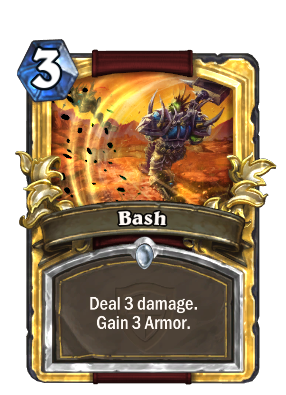 You might think bashing doesn't take a lot of practice. It doesn't.

Bash is a common warrior spell card, from the Grand Tournament set.

Bash can be obtained through The Grand Tournament card packs, or through crafting.

For example, targeting your own hero with Bash, when you have no Armor, will effectively convert 3 Health to 3 Armor. [1]

A strong card for Control Warrior for early game. It can remove a minion as well as boost your Armor count for Armor synergy cards like Shield Slam later on.

Compared to Shield Block, Bash has the proactive ability to deal damage upfront, trading off the card draw and 2 Armor. This can make it less situational than Shield Block, whose Armor bonus may not make a difference without the combo of Shield Slam.