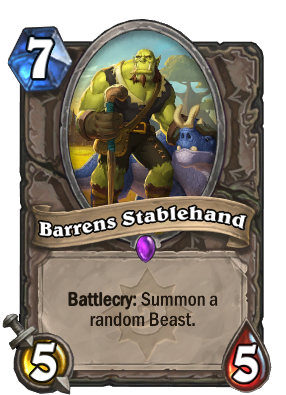 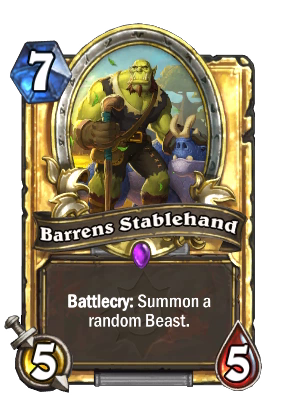 Barrens Stablehand is an epic neutral minion card, inducted into the Legacy set, formerly from the Classic set. 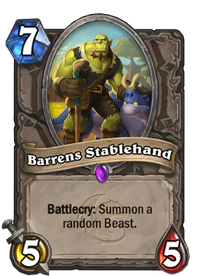 Barrens Stablehand can be obtained through crafting only.

Two copies of regular Barrens Stablehand (Core) are obtained for raising sum of all your class levels to 45.

Two copies of golden Barrens Stablehand (Core) are obtained for winning 2500 games across all classes.

Barrens Stablehand (Core) is uncraftable and cannot be crafted or disenchanted.

A solid Arena card. Strong pulls include Stranglethorn Tiger, King Mukla, King Krush, and Core Hound. Even getting an Ironfur Grizzly is a 7 mana 7/7 with upsides split between two bodies. However, the high number of misses and this minion's restricted cost make it undesirable for Constructed play.

Because of the huge range of stats and effects beasts have, Barrens Stablehand is best played when ahead on the board to reduce the cost of missing. Warlocks can also use Deck of Chaos to apply pressure and to cheat this minion out for a discount.

The Barrens is a large zone in central Kalimdor controlled mostly by the Horde. It is a massive savanna, with a few oases in the north-central region around the Crossroads. Before the upheaval, several large kaldorei cities stood here. Now, those brave few willing to scrape out a life on the arid plains inevitably run afoul of centaur warbands or quilboar raiding parties. Despite its often uninviting terrain and hostile inhabitants, the Barrens receive a good deal of interest from Alliance and Horde alike, as well as races native to Kalimdor. Trade routes crisscross the landscape leading to and from more inviting regions, and the most notable route is the Gold Road that runs north-to-south through the Barrens and beyond. Rumours suggest that precious minerals and treasure-filled ruins await those with the courage to investigate.

This orc stablehand appears to be tending to a kodo beast.