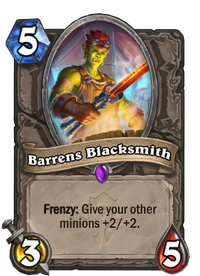 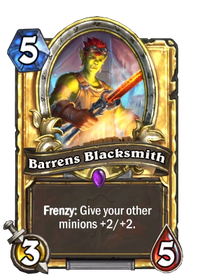 Barrens Blacksmith is an epic neutral minion card, from the Forged in the Barrens set.

The Barrens Blacksmith provides a strong buff along with a decently sized body, but finding a way to naturally trigger the frenzy takes a bit of planning. Warrior decks have plenty of self-harm effects, including Whirlwind and Cruel Taskmaster that can damage the Barrens Blacksmith cheaply. It can be very potent to summon this minion with Overlord Saurfang, giving a strong stat buff once it is revived.

Mages can ping to activate this minion's effect with Fireblast, but this is generally considered too slow and an inefficient use of mana.

This card likely portrays the only female orc blacksmith in the Northern Barrens, Ornag, located at the Mor'shan Rampart.