This article is using {{Card template}}.
See Help:Style guide/Card for how to edit this kind of article.
Edit this article
Baron Geddon
336 • EX1_249
Regular 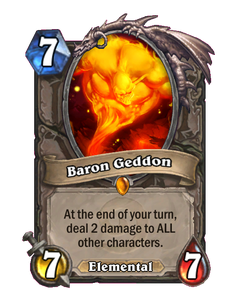 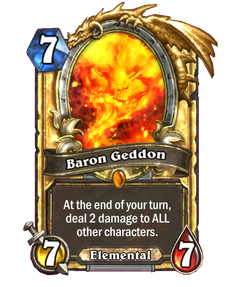 Dimensions: Full • 330 x 410px
Elite
At the end of your turn, deal 2 damage to ALL other characters.
Flavor text

Baron Geddon was Ragnaros's foremost lieutenant, until he got FIRED. 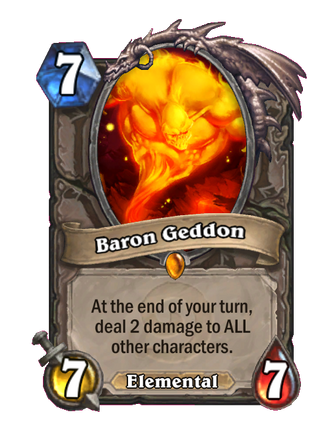 Baron Geddon is a legendary neutral minion card, inducted into the Legacy set, formerly from the Classic set. 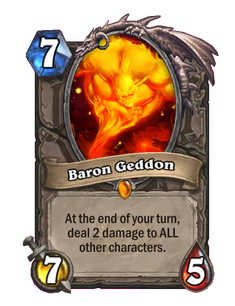 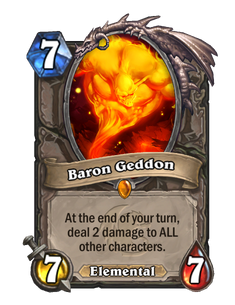 Baron Geddon is obtained for raising sum of all your class levels to 28.

Golden Baron Geddon (Core) is obtained for winning 5000 games across all classes.

Baron Geddon (Core) is uncraftable and cannot be crafted or disenchanted.

At 7 mana for a 7/7 minion, Baron Geddon is a great card for going against decks which get out a lot of minions fast. Baron coupled with just about any other AoE card can clear the opponent's side of the board very easily. This card is also a very good game changer, and can turn the tide of a game very quickly.

Baron Geddon works well in Control Warrior decks as a board clear, where the 2 damage to your hero matters little. As an Elemental,

Frost Lich Jaina can turn Baron Geddon into a potent AoE and healing card and negates 2 damage to your own hero, and even if Geddon's effect would kill Jaina, it won't happen because Lifesteal restores more than the initial damage for each other character (including players), making him a powerful comeback card.

Baron Geddon is one of the eldest of all fire elementals, and he served as Ragnaros’ right hand during the beginning of the war against the titans. During one of the first battles against the then-unknown titan attackers, Geddon was defeated and forced into humiliating retreat. Ragnaros immediately demoted his commander, thinking that Geddon had been defeated by an inferior foe, since the Old Gods and their lieutenants had never yet met a challenge. His replacement was the flamewaker

Majordomo Executus; Geddon was infuriated that a creature not purely of fire replaced him, a noble among the elementals. In an effort to regain his master’s faith, Baron Geddon planned the now legendary betrayal of Thunderaan the Windseeker. In the midst of a great battle, Geddon separated the massive lightning elemental from his allies, and together with

Garr and Ragnaros, they ambushed the great elemental in an effort to steal his power.

Thunderaan was a powerful foe, even to an elemental lieutenant such as Ragnaros, and the Firelord was unable to completely destroy him as he had hoped. The three did manage to seal the Windseeker away, however, and imprison his essence in the talisman known as the Bindings of the Windseeker. Ragnaros then broke the talisman in half and charged each of his lieutenants, Garr and Geddon, with keeping one half safe. It is said that if the halves are brought together again then Thunderaan might escape. However, Geddon did not win back his old position by his master’s side. Today, he waits and bides his time, hoping to grow strong enough to find a way to overthrow or discredit Majordomo Executus. Baron Geddon currently dwells in the tunnels of the molten core of Blackrock Mountain, where he keeps a tireless vigil against intruders. Both Baron Geddon and Garr draw their considerable might from the blazing runes carved deep into the floor of Molten Core.