This article is using {{Card template}}.
See Help:Style guide/Card for how to edit this kind of article.
Edit this article
Barkskin
43282 • LOOT_047
Regular 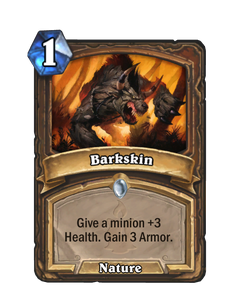 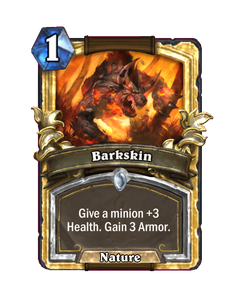 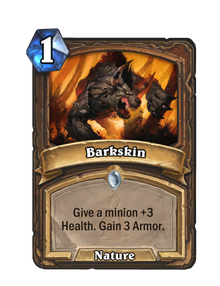 Barkskin is a common druid spell card, from the Kobolds & Catacombs set.

A cheap spell that can be used to trade effectively and also gain a bit of health.

Compared to Earthen Scales, Barkskin is much stronger on smaller minions, providing a larger buff and possibly more Armor. However, Druid decks running smaller minions aren't looking for health gain and have more meaningful buffs to use like Mark of the Lotus or Power of the Wild. Druid decks looking for armor or health gain can instead use Branching Paths, Feral Rage, Moonglade Portal, or Oaken Summons. This leaves Barkskin at an awkward power level.

This is an easy way to activate Lesser Jasper Spellstone.

This is comparable to the Priest spell, Power Word: Shield.

Barkskin is a level 26 ability for Balance, Guardian, and Restoration druids. It causes the druid's skin to become as tough as bark, reducing all damage they take by 20% and preventing their spellcasts from being delayed by damage. The effect lasts 12 seconds, is usable in all shapeshift forms, and can be used even while affected by most forms of crowd control.