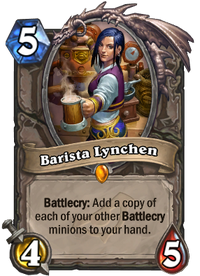 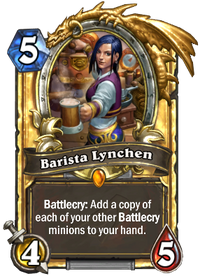 Battlecry: Add a copy of each of your other Battlecry minions to your hand.
Flavor text

Barista Lynchen is a legendary neutral minion card, from the Rise of Shadows set.

Barista Lynchen can be obtained through Rise of Shadows card packs, or through crafting.

Barista Lynchen is an excellent value play, which can double up on any Battlecry minions you can stick on the board. Copying one minion is decent value, but her true strength is copying multiple ones. She works especially well with 5-mana minions that can be played on the same turn as her, including Harrison Jones, Dragonmaw Scorcher, and the Drustvar Horror created by Swampqueen Hagatha. This also works with any minion under 5 mana, but they generally have weaker effects.

Your opponent will almost certainly try to kill off your Battlecry minions when they have the chance, so don't be afraid to take any value you can.

Her effect is low tempo, so its better off ignored against aggro decks.

Mel Lynchen is a barista who works at the Legerdemain Lounge inn in Dalaran in World of Warcraft.