This article is using {{Card template}}.
See Help:Style guide/Card for how to edit this kind of article.
Edit this article
Bane of Doom
23 • EX1_320
Regular 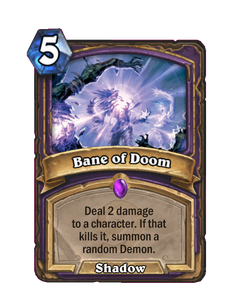 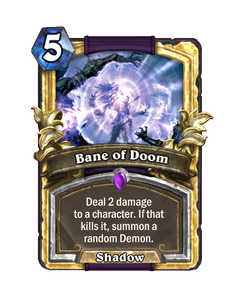 Dimensions: Full • 330 x 410px
Deal 2 damage to a character. If that kills it, summon a random Demon.
Flavor text

My advice to you is to avoid Doom, if possible. 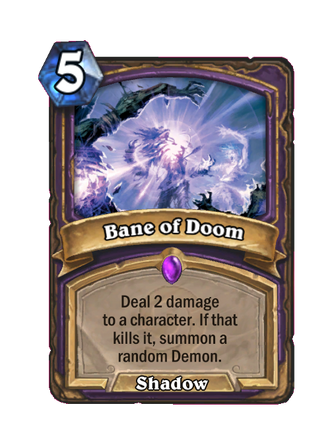 Bane of Doom is an epic warlock spell card, inducted into the Legacy set, formerly from the Classic set. 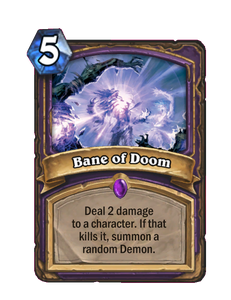 Bane of Doom should only be played when it kills the target. The alternative, dealing only two damage without summoning a Demon, is a very weak play given the five mana cost.

The spell can be very strong or quite weak depending on the Demon it summons, as demons have a huge variance in strength. A weak demon like

Howlfiend can incur a huge tempo loss or put you at a disadvantage, or a temporary one if it summons a Dormant demon like

Priestess of Fury can give you a strong lead. Of course, if the player is about to lose the game, using Bane of Doom may be the only option, since it has the potential to summon a Demon that can disrupt the opponent's attack, such as

Bane of Doom can be used with Spell Damage minions (like

Bloodmage Thalnos) to increase the amount of targets it can kill, thereby increasing the potential to activate its demon-summoning effect.

A list of collectible Demon minions in Standard and Wild can be found here.

Felguard.[7] No other Demons would be summoned.

Piloted Shredder, which (as Bane of Doom does now) pick from among all collectible cards of the stated type. This discrepancy was noted by the developers, especially in response to player requests following the release of Goblins vs Gnomes,[8] but the card was only changed with the patch accompanying the release of Blackrock Mountain.

Mal'Ganis, which could have resulted in Bane of Doom being too powerful. The restricted range of minions also limited the amount of RNG involved, decreasing the potential to swing matches based on which minion was summoned. It also gave developers more "design space" by allowing them to add more Demons to the game without worrying about their potentially unbalancing effect if summoned by Bane of Doom.

Following 4 months of requests from players, with Patch 2.4.0.8311 the spell was changed to be able to summon any collectible Demon. The change was highly unusual, given the developers' stance on not buffing cards, since it was considered to make the spell far more powerful, and led to a significant rise in its popularity. The developers categorised the change as a 'bug fix' rather than a card change, later explaining their motivation for the change as "when it didn't do what it said it did, you couldn't trust any other cards with the same text to do what they say. That's it."[9]

This spell's first incarnation was as 'Doom' in Warcraft III, where it was the ultimate ability of the pit lord neutral hero. It would curse a target to take damage and when it died it would summon a doomguard. It was later reinvented in World of Warcraft as the infamous warlock spell 'Curse of Doom', later renamed 'Bane of Doom'. It applied a damage over time effect to a character, and each time it dealt damage had a chance to summon a Demon Guardian. While Cataclysm saw the spell deal damage every fifteen seconds, with a chance to summon an Ebon Imp who would automatically assist the warlock, the original spell had a duration of 60 seconds and dealt damage only once, at the completion of the effect, with a chance to summon a Doomguard. Unlike the Ebon Imp, the summoned Doomguard was not under the warlock's control, and would immediately attack the warlock upon spawning. The Doomguard was quite capable of killing the warlock and his allies, and had to be enslaved via the warlock's Enslave Demon spell in order to control him, although he could resist enslavement, or break free later on and begin attacking the warlock again. Prior to Patch 2.4.0.8311, this was somewhat ironic, since

Doomguard was not one of the demons that could be summoned by the Hearthstone incarnation of Bane of Doom.