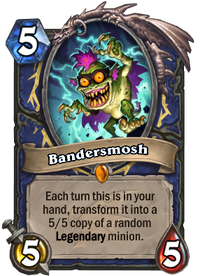 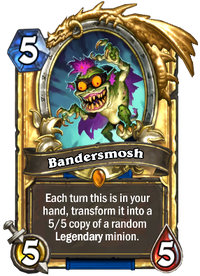 Each turn this is in your hand, transform it into a 5/5 copy of a random Legendary minion.
Flavor text

The Shudderwock finds him particularly frumious.

Bandersmosh is a legendary shaman minion card, from the Descent of Dragons set.

Bandersmosh can be obtained through Descent of Dragons card packs, or through crafting.

Although its effect is random, the number of good minions Bandersmosh can transform into are surprisingly large. It has an average statline for a medium-cost card, so it can surpass low-statted legendaries (Al'akir the Windlord, Zilliax, Hir'eek, the Bat) and use powerful effects earlier or more efficiently (Ysera, Unleashed, Emeriss, Shudderwock). If you're less lucky, you can at least play understatted value-oriented legendaries (Hex Lord Malacrass, Madame Lazul, Halazzi, the Lynx) without losing as much tempo or generically useful legendaries (Lord Godfrey, Tirion Fordring, Veranus). It does have its misses, though, such as conditional or off-class synergy effects (Commander Rhyssa, Elise the Enlightened, Blastmaster Boom), legendaries whose power relies on its stats (The Beast, Deathwing, Mad Aspect, King Mukla), and truly useless legendaries (Duskfallen Aviana, Harbinger Celestia, Millhouse Manastorm).

Bandersmosh is unique to Hearthstone.