"Mukla is a year older, and he LOVES bananas! Whenever one of your minions dies, he gives you a Banana to celebrate!"

The Brawl saw King Mukla granting the player a random Banana card each time one of their minions died. Players were able to create a custom deck specifically for the Brawl. All matches were played on the Stranglethorn battlefield.

Additionally, Banana Brawl! was one of nine Tavern Brawls featured as part of the 100th Brawl, A Cavalcade of Brawls!. Its mechanics were used by the warrior class.

Banana Brawl! is essentially a regular Casual match, with one addition: whenever a minion dies, a random Banana card is generated for its owner. There are four different Banana cards, each with its own effects, although they are all 1 cost spells. Players do battle using custom decks, of any class.

The challenge of this Brawl lies in the creation of custom decks designed to make the most of the Banana cards.

All Banana cards are 1 cost spells. 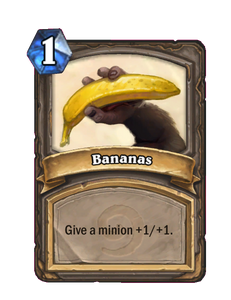 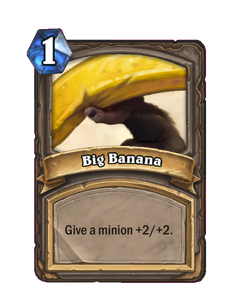 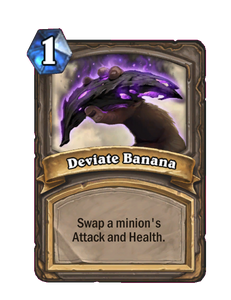 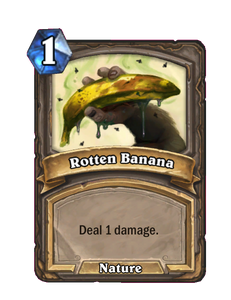 Banana Brawl! is essentially the same as Constructed play, however the addition of Bananas makes several different strategies more likely to succeed.

Because Bananas are spells, cards that benefit from the use of spells, by either player, become more valuable. Additionally, all the Bananas are 1-mana spells, activating cards like Gazlowe.

Some cards and mechanics that benefit from the use of Bananas: (For a full list of cards with spell synergy, see Spell#Related cards)

It is quite easy to fill your hand with mostly Bananas, leaving no room for the cards drawn from the deck. Overdraw and even Fatigue can feature prominently in this Brawl. Be careful when using Unleash the Hounds, Violet Teacher, Imp Gang Boss or similar cards or the Reinforce Hero Power. Try to empty your hand of Bananas and anticipate the effect of playing Bananas on Gadgetzan Auctioneer.

Having your hand mostly full has good synergy with Mountain Giant and Twilight Drake.

Big Bananas together with Deviate Banana can deliver a lot of burst damage.

Bananas, together with other cheap spells and minions can spell the doom of a player controlling Fel Reaver.

Due to many of its class-specific cards having great synergy with Bananas, namely Mana Wyrm, Sorcerer's Apprentice and Flamewaker, Mage is a popular and extremely viable choice in Banana Brawl!. Mirror Image allows the player to generate Bananas on the death of the Mirror Image minions, and can be buffed with Bananas themselves to form a wall against enemies. A possible but unlikely infinite loop involves the use of Violet Teacher to spawn minions, which can be killed by 0-cost Rotten Bananas due to Sorcerer's Apprentice's effect, generating potentially infinite Bananas that can trigger Flamewaker and Mana Wyrm's effects.

Secrets can also be used to great effect for classes that have them. A Mage can take advantage of Mirror Entity to generate extra minions, and Spellbender to draw the effects of the opponent's Bananas, spawning a free buffed minion or diverting a Rotten or Deviant Banana from its target. Paladins can use Avenge to buff an existing minion in addition to receiving a Banana, while Redemption can spawn another free minion that may be easily killed for another Banana.

Cards that take advantage of your opponent having many Bananas in their hand can be used, such as Goblin Sapper and Clockwork Giant. Loatheb can be used to prevent your opponent from easily playing their Bananas. Kezan Mystic is a good inclusion due to the number of Mages and Paladins that run Secrets in their decks, letting you steal the benefits of Secrets they play.

Rotten Banana can be used to trigger Enrage, destroy Divine Shields or to finish off weakened minions.