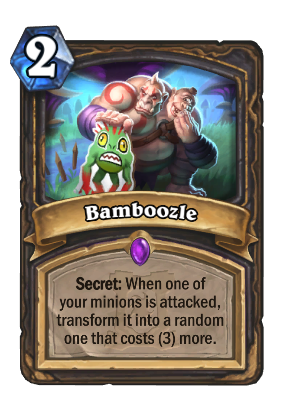 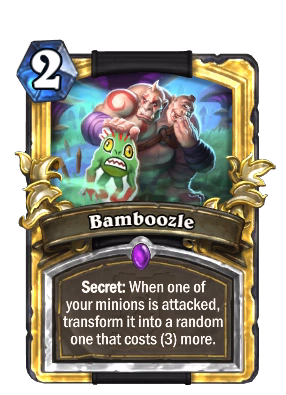 Secret: When one of your minions is attacked, transform it into a random one that costs (3) more.
Flavor text

"WE DO YOU A BAMBOOZLE, HOOMAN!"

Bamboozle is an epic rogue spell card, from the Ashes of Outland set.

Bamboozle's "Evolve" effect allows a Rogue player to get even more mileage from minions, due to the significant increase in the minion's post-transformation Mana cost. Even 1-mana Lackeys are likely to become much stronger from being changed into a random 4-mana minion. Good choices of minion to bait attacks include Battlecry minions, or heavily damaged minions who aren't likely to survive trading into another minion on your turn. Minions with Taunt will also force your opponent to attack them if they can't be destroyed otherwise.

Conversely, minions with buffs or valuable on-field effects such as Edwin VanCleef or Shadowjeweler Hanar should not be played while this Secret is active.