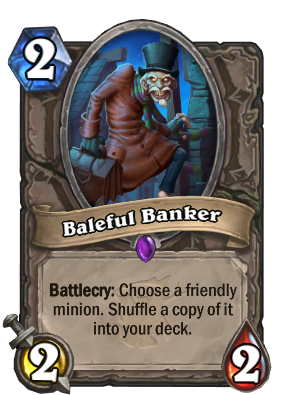 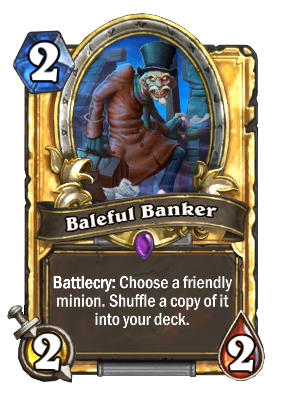 Battlecry: Choose a friendly minion. Shuffle a copy of it into your deck.
Flavor text

Baleful Banker is an epic neutral minion card, from the The Witchwood set.

Baleful Banker can be obtained through The Witchwood card packs, or through crafting.

Baleful Banker is comparable to Mage's old card, Manic Soulcaster, but 1 mana cheaper and Neutral. This card's effect lets you duplicate key or high-value cards to use later. To ensure value, Baleful Banker should be played on the same turn as a powerful minion, such as The Lich King or Tirion Fordring.

To help generate immediate impact, Baleful Banker can be played with Recruit mechanics to immediately put the shuffled minion onto the board. It can also be used in combos that require a specific card to be in the deck or as a way to "un-brick" the combo if the required minion is drawn.

This effect also delays Fatigue damage by one card, which can be relevant in some matchups.