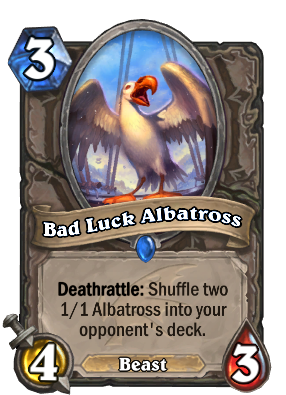 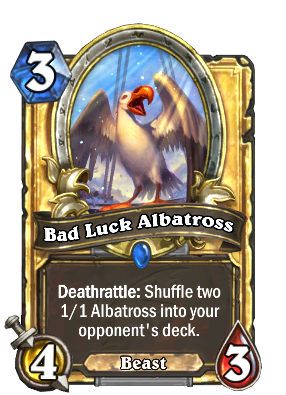 Legend holds that it's bad luck to harm it. So maybe just pat it on the head, okay?

Bad Luck Albatross is a rare neutral minion card, from the Descent of Dragons set.

Bad Luck Albatross can be obtained through Descent of Dragons card packs, or through crafting. 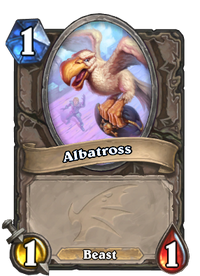 The unique factor of this card lies in its Deathrattle, adding two ineffectual cards to the opponent's deck. Much like Weasel Tunneler, this can create 'dead draws' that interfere with the opponent's strategy without the risk of your opponent playing those tunnelers to give you dead draws in turn. The two Albatrosses also disable Highlander effects, effects that are incompatible with neutral minions like Lightforged Crusader and Apexis Blast, making this minion an excellent counter to decks reliant on their power. It can also disrupt any cards that rely on minions in their deck like Recruit cards, Scavenger's Ingenuity, and Muckmorpher, and adds a near-useless card in their deck to make the odds of drawing good cards from the effects of Galakrond, the Unbreakable and Wondrous Wand worse.

You can shuffle large numbers of Albatrosses into the opponent's deck using cards like Grave Rune and Psychopomp. Be careful of doing this in control mirrors however, as the opponent will often gain a heavy advantage in Fatigue.