This article is using {{Card template}}.
See Help:Style guide/Card for how to edit this kind of article.
Edit this article
Backstreet Leper
40492 • CFM_646
Regular 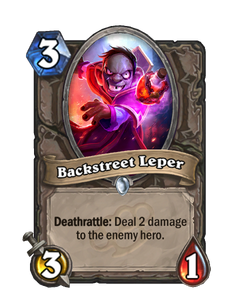 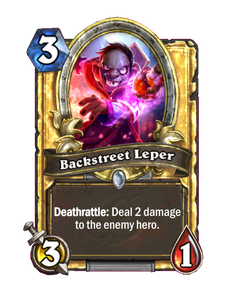 Quit playing games with his heart. And his fingers. And foot. It's rude. 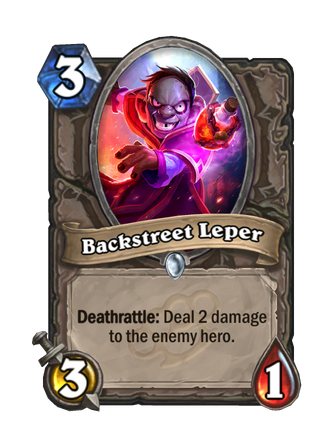 Backstreet Leper is a common neutral minion card, from the Mean Streets of Gadgetzan set.

A larger and more expensive

Magma Rager in damage output and lack of Health.

This backstreet leper gnome appears to have been recruited by the Kabal. The Kabal's magic appears to have empowered this gnome far beyond its normal stats, and may even have managed to cure the gnome's affliction, although its title suggests otherwise. Fittingly, its summoning quote is a twist on the

The gnome also seems to have been armed by his new allies, with his Deathrattle seeing him throwing a

Volcanic Potion (or similar Kabal concoction) at the enemy hero. While normally an indiscriminate AoE effect, apparently the Backstreet Leper is capable of more precise targeting, throwing it directly at the opponent rather than into the main battlefield.