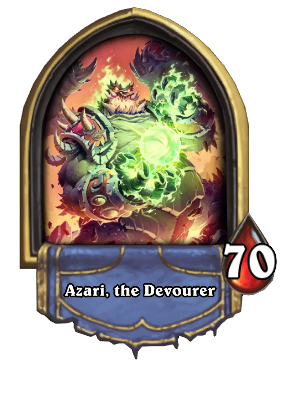 The most terrible of demons is loose! And VERY hungry.
External links

For the minion card of the same name, see Azari, the Devourer

Azari, the Devourer is one of the final bosses that can be encountered during the Dungeon Run.

Mulligan for your best cards, because Azari's Hero Power will be constantly going through your deck. It will easily destroy about two thirds of it, putting you in fatigue before you even hit turn 10. If you have draw power, consider also using them to get to your good cards before Azari devours them. Consider keeping some healing options if you feel that you cannot defeat him before you succumb to fatigue damage. Ultimately, with regards to your deck it boils down to luck over whether Azari destroys what you need or mills you down to what you need.

Azari uses a deck filled with demons. It is recommended to be as aggressive as possible, especially since none of his cards can heal him while things like Flame Imp, Wrathguard and Pit Lord are doing a fair amount of damage to him. Kabal Trafficker's endless stream of demons and the immunity granted by Mal'Ganis make these his biggest threats, so move to eliminate them on sight.

If your deck is weak against Azari, try to obtain certain active treasures such as Wondrous Wand (saves 3 cards from burning), Aleatoric Cube (if timed right, can save you from fatique) and Gloves of Mugging (potentially steals powerful demons such as Mal'Ganis and Voidlord). Having Archbishop Benedictus or Chromaggus in the deck may also be helpful since they both give you additional resources.

Azari is weak against early pressure since he does not have early game removals. Cards like Loyal Sidekick can kill him before turn 10 when he can clear the board with DOOM!

King Togwaggle
The devourer is being loosened! Run for it!

Azari, the Devourer
I HUNGER.

Azari, the Devourer
I drink your fear and feast on your remorse.

Azari, the Devourer
I feed.
More...
Give me more...
This is your end.
I will devour this world.

Azari was responsible for the creation of the Spellstones, having proposed to tempt mortals using gems of power.[1]