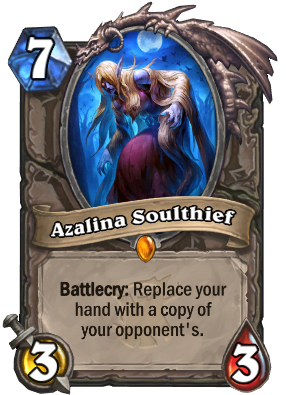 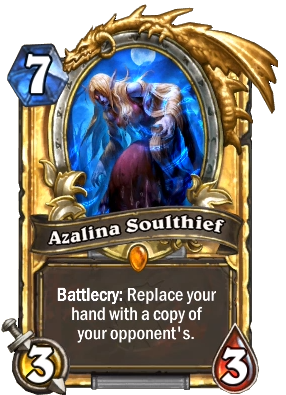 Battlecry: Replace your hand with a copy of your opponent's.
Flavor text

The cards are always golden on the other side.

For the boss of the same name, see Azalina Soulthief (boss)

Azalina Soulthief is a legendary neutral minion card, from the The Witchwood set.

Azalina Soulthief can be obtained through The Witchwood card packs, or through crafting.

Azalina Soulthief has a rather shameful 3/3 body for 7 mana, but could make up for it in its unique effect. This card is a tool to replenish your hand if your opponent has more and/or better cards than you, but has the extra drawback of losing the cards you currently are holding. As such, Azalina at first glance is only useful in the condition where:

There are some matchups where it can be very powerful. For instance, one could steal a Quest reward, or perhaps Azari, the Devourer from a Control Warlock. In Rogue decks, you can use this card to pump up Tess Greymane-related effects.

Azalina can be seen as a neutral Divine Favor, allowing you to restock an empty hand when playing as an Aggro deck. While she's likely to give you relatively slow cards or weak combo pieces, having any cards is useful for maintaining tempo.

One of the other benefits of Azalina Soulthief is her use in combo decks. She can be played after King Togwaggle, copying his King's Ransom to permanently switch decks with your opponent. After your opponent plays their King's Ransom, you simply switch back. You can play both cards on the same turn using Aviana and Kun the Forgotten King. She can also allow to infinitely replay Time Warp, by playing Lorewalker Cho and bouncing Azalina with a Time Rewinder Spare Part, putting both cards in your opponent's hand to be replayed endlessly.

Azalina Soulthief is unique to Hearthstone.

The forest’s depths always harbored dangerous inhabitants, but now, the curse calls them forth with a dirge only they can hear. There are tales of weeping, ghostly maidens that drift at the edge of vision, and shifting elementals who steal the faces of men. Even the Emerald Dragonflight is not immune to the curse’s influence.

The truly unlucky report encounters with a vengeful spirit who seems to know their thoughts, and who speaks lies in the voices of friends and allies.[1]