This article is using {{Card template}}.
See Help:Style guide/Card for how to edit this kind of article.
Edit this article
Awaken the Makers
41494 • UNG_940
Regular 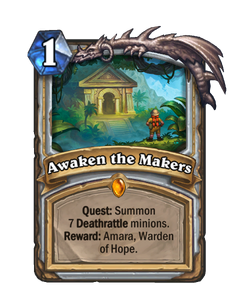 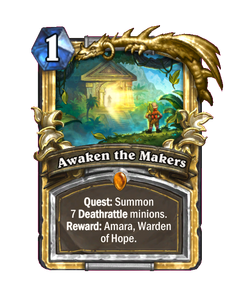 They keep hitting the Snooze button. 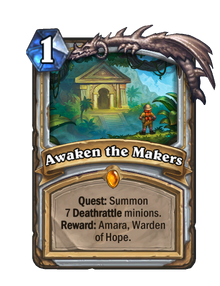 Awaken the Makers is a legendary priest spell card, from the Journey to Un'Goro set. 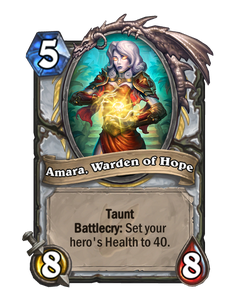 Awaken the Makers is a rather peculiar quest because unlike the other ones, its reward doesn't generate any card advantage and only little value. While its big amount of stats for its mana cost make it a nice tempo play, this is offset by the condition of having to complete the quest. However, with the increase to the maximum health, Amara offers bigger heal to a hero in a single card than any other card. As such, Amara is most useful if you have already taken some damage. Because of the nature of deathrattle-minions, this is likely to be the case; if not, then you can choose to hold on to Amara until your Health drops too low.

While Awaken the Makers is obviously always useful against aggressive decks (i.e. many decks), its strongest feature is its ability to make other cards shine. Most cards with deathrattle are slow and lend themselves to a playstyle that prioritizes card value over tempo, and therefore Deathrattle Priest's gameplan is often to grind out their opponent in a war of attrition. On one hand your enemy has an opportunity to rush past you and deal 30 damage before you have a chance to stabilize the board, and on the other hand, your quest reward does not need to generate any further value. With its unprecedented heal Amara provides the player with one precious resource: time. With your longer survivability, even the slowest of value-cards like Barnes, Spiritsinger Umbra, Cairne Bloodhoof, Herald Volazj and N'Zoth, the Corruptor can work their magic.

Its true potential is only unlocked by the minions mentioned above, meaning that if you want to make optimal use of it, you may need to craft a large number of legendary cards.

Amara's effect will still trigger even if your hero is currently Lord Jaraxxus (acquired through Thoughtsteal, Mind Vision, etc.) or Ragnaros the Firelord (as a result of Majordomo Executus). Since both of these heroes' ultra-powerful Hero Powers are intended to be balanced by their low health scores, playing Amara with either hero in play is a brutally powerful and generally game-winning combination.

Amara is unique to Hearthstone. She appears to be one of the titanic watchers charged with watching over Un'Goro Crater, originally created to serve as the "experimental ground" of the titans.

Titanic watchers (or simply watchers or sentinels) are the first generation of titan-forged. Most of them would later be tasked with the protection of specific places. The titan-forged were divided into the aesir, made of metal and masters of storms, and the vanir, made of stone and masters of earth. A few are also made of ivory. After they destroyed the Black Empire, they participated in the ordering of Azeroth along with their brethren.

Amara appears to be similar to Nablya, a titanic watcher and apprentice of the titan Khaz'goroth that adventurers encounter in Un'Goro in World of Warcraft.