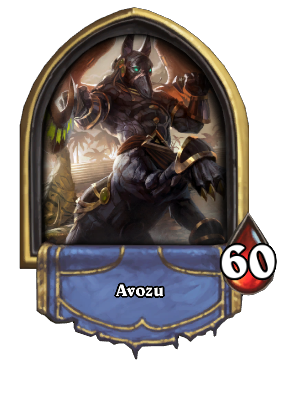 Avozu the Hunter will stop at nothing until his prey is subdued.

Avozu is a boss that can be encountered initially in Chapter 1 of Tombs of Terror. After completing Chapter 1, this boss encounter will be available in any completed chapter.

Avozu has the weakest hero power among the bosses of 7th level. Even though it's likely to kill minions, overall it doesn't allow full board control. The consequences can be avoided or reduced by First Aid Kit, Captured Flag, Titanic Ring or trades with enemy minions. It's also fully neutralized by Cloak of Invisibility passive, which will enable defeating Avozu even with a swarm deck of weak minions. Aggro decks without Cloak of Invisibility can still easily lose in this battle due to the advantage in boss' starting mana and the presence of higher-cost minions in his deck.

Normal deck is budget and slow deathrattle hunter with a small number of swarm and big beasts to bolster on the table. Despite the fact that there are only two deathrattle activators (Feign Death) and there is almost no synergy between minions, it is better not to leave the enemy board and carefully trade with any minion that Avozu plays, since it is difficult to safely rush into face due to the large amount of health at this level.

Heroic deck is a good likeness of Midrange Hunter with several synergies between the beasts, so it is still desirable to have a good board to immediately eliminate the boss' minions and not let him fight back by the hero power. Therefore, in addition to the Cloak of Invisibily and First Aid Kit, Glyph of Warding and Rocket Backpacks will perform well here.

Avozu
Displays of fear only enhance the chase.

Avozu
A test between predator and prey...
Every creature has vulnerabilities.
What doesn't kill it makes me stronger.
What will this reveal?

Avozu
I hunt the most dangerous game. Also: murlocs.
I talk to myself a lot. Talking to the prey is just weird.
Usually I hunt beasts, but I am open-minded.

A well placed spear should do it...

Everything a hunter needs.

Avozu is original to Hearthstone. He is a Tol'vir.