This article is using {{Card template}}.
See Help:Style guide/Card for how to edit this kind of article.
Edit this article
Aviana
2796 • AT_045
Regular 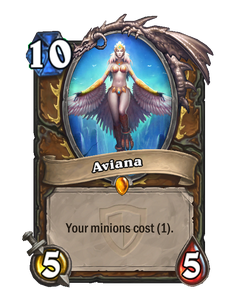 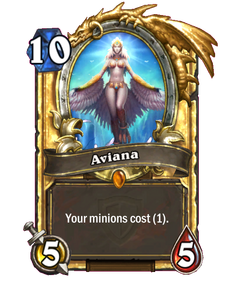 Call her "Tweety". She'll find it real funny. I PROMISE. 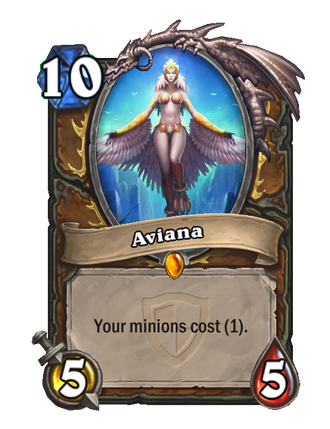 Aviana is a legendary druid minion card, from the Grand Tournament set.

Aviana's extremely low stats is made up by her potentially massive cost reduction effect. If left standing, the player can dump out many big minions in a single turn. However, her low Health and high upfront cost makes this situation uncommon. This can be avoided with

Emperor Thaurissan, which causes all cost-reduced minions to be played for 0 mana. If played as a control value card, keep her protected behind a Taunt minion if possible.

Aviana is best combined with

Kun the Forgotten King, who can restore all the mana spent playing Aviana and allows you to follow it up with other minions on the same turn. Aviana and Kun are essential cards in combo-based decks for this reason, allowing many different kinds of combos to be performed, such as summoning multiple copies of

Azalina Soulthief. Since Aviana costs 10 Mana, this combo will require

Innervate or other cost-reduction effects.

Aviana is a winged demigoddess and mistress of the Mother Tree, G'Hanir. She was killed in the War of the Ancients but was resurrected during Ragnaros' siege on Mount Hyjal.

Swift and ruthless, Aviana personifies the capricious nature of the winds, and her children are no different.

Ten thousand years after her death,

Deathwing the Destroyer returned to Azeroth from Deepholme. Under his command the fire elementals of Ragnaros marched upon Mount Hyjal, to make way for the Firelord himself to set fire to the World Tree Nordrassil. During their siege adventurers were called from across Azeroth to assist in the mountain's defense. One of the tasks assigned to them was to assist in the resurrection of the demigods, one of whom was Aviana. Besides resurrecting her, Adventurers were also assigned to destroy her fallen children, the harpies, who were attacking their mother's shrine. When all was done however the mighty Demigod of the Sky was reborn and Aviana returned to the world to help repel the invading Fire Elementals and to send Ragnaros back to the Firelands.