This article is using {{Card template}}.
See Help:Style guide/Card for how to edit this kind of article.
Edit this article
Avenging Wrath
1174 • EX1_384
Regular 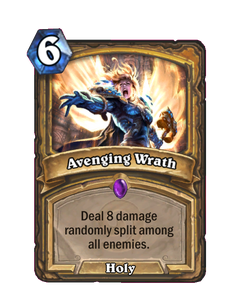 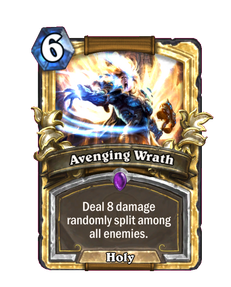 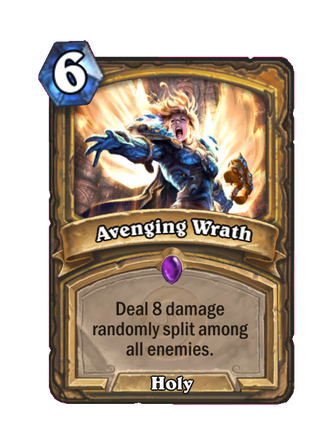 Avenging Wrath is an Epic Paladin spell card, inducted into the Legacy set, formerly from the Classic set. 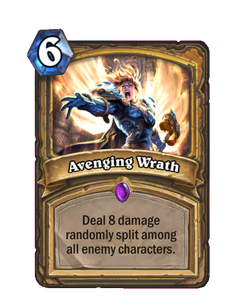 This spell shoots 8 missiles, each one dealing 1 damage to a randomly selected enemy character:

A card that deals 8 damage for 6 mana is a card that should not be taken lightly. Whether facing an opponent that has a full board of creatures, or a caster that relies on spell damage or their hero alone, having an empowered version of the mage card

This spell can be very effective for clearing boards of 1 or 2 Health minions, with a good chance of striking each minion at least once. It is less reliable against large minions, although it can still be effective for softening up or finishing off higher Health threats. For a full stacked board against you, Avenging Wrath is best paired with

Equality to maximise its effectiveness. Also, with Spell Damage minions Avenging Wrath can shoot additional missiles to hit the enemy even harder.

Armorsmith. With minions such as these in play, this spell has the potential to grant the opponent far more utility than it deals damage to them, potentially sealing the paladin's fate.

Given the potential for each missile to hit the enemy hero, the spell can be used as an effective burst attack when the board is empty, or close to empty. Remember that since the enemy hero is the one target that is always present, the smaller the number and the weaker the enemy minions on the board, the greater amount of missiles on average that will end up hitting the enemy hero.

Avenging Wrath originated in World of Warcraft as a paladin ability. It grants +20% damage and healing for 20 seconds and visually shows golden wings and an ambient glow on the paladin. While this card's name is taken from that ability, the effects themselves do not seem to have any connection.