This article is using {{Card template}}.
See Help:Style guide/Card for how to edit this kind of article.
Edit this article
Avenge
1804 • FP1_020
Regular 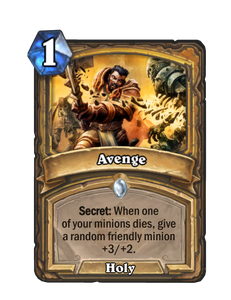 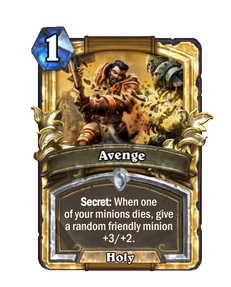 Several paladins have joined together to deliver justice under the name "Justice Force". Their lawyer talked them out of calling themselves the Justice League. 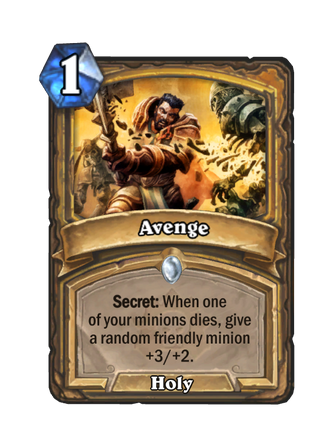 For the keyword in Battlegrounds, see Avenge (ability).

Avenge is a common paladin spell card, from the Naxxramas set.

(For a much more extensive discussion of sequences of events, see the advanced rulebook.)

Activation based on other friendly minions

Activation order of Secret and Deathrattle

As stated by Ben Brode prior to the adventure's release,[9] this card has good synergy with

Defender's death to grant +3/+2 to a friendly minion.

Noble Sacrifice can be used to manipulate your opponent.

Redemption can be used instead of Avenge if your opponent thinks that your secret is Noble Sacrifice, because when they realize that it is not Noble Sacrifice they will focus on killing your bigger minions, but to their surprise your Redemption will revive your bigger minion, forcing them to attack with their remaining minions, use up the rest of their mana, or wait until their next turn. If they think your remaining secret is Redemption they will focus on killing your weaker minion which to their surprise will trigger Avenge instead. If both Redemption and Avenge are played you can give your big minion some decent staying power.

Commander Rhyssa doubles the effect of all secrets, resulting in Avenge triggering twice on a minion or two different ones.