This article is using {{Card template}}.
See Help:Style guide/Card for how to edit this kind of article.
Edit this article
Augmented Elekk
49269 • BOT_559
Regular 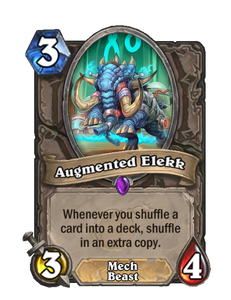 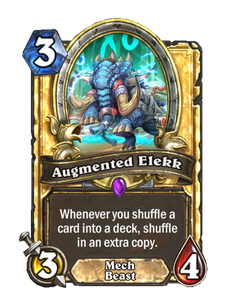 Dimensions: Full • 330 x 410px
Whenever you shuffle a card into a deck, shuffle in an extra copy.
Flavor text

Her friends call her "Shuffleupugus". 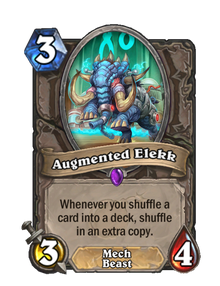 Augmented Elekk is an epic neutral minion card, from The Boomsday Project set.

This card has strong synergy with anything that shuffles in cards, such as Togwaggle's Scheme and Lab Recruiter. While most minions that shuffle in cards can shuffle extra cards by replaying it in some way (like Shadowstep & Spirit of the Shark, or Sonya Shadowdancer & Brann Bronzebeard ), this card is the only way to multiply spells that shuffle in cards like Academic Espionage. On top of this, this minion has good stats for its cost, so it can be played on curve with no issues and is likely able to survive the next turn to play these shuffle cards on tempo.

Augmented Elekk also works spectacularly well with Bomb Warrior, shuffling in extra bombs after equipping Wrenchcalibur or in combination with Clockwork Goblin. The consistency boost will deal more damage to your opponent and set up for Blastmaster Boom more easily.

For Warlock and Demon Hunter, shuffling Soul Fragments into the deck can increase the chance of the player drawing it as well as providing more healing. It can also be used as additional resource to fuel up cards that remove Soul Fragments from the deck.

For Highlander Deck: shuffling additional Bad Luck Albatross, Weasel Tunneler, Beneath the Grounds copies can devastate their opponents as it is very difficult to not draw them but adding an additional copy makes it more difficult to draw them out.

It also works for Tradeable Cards especially it only costs 1 mana but it may lower your chances to draw your key cards unless that Tradeable Card is essential.

Elekk are a species of large, elephant-like creatures native to Draenor that the draenei commonly employ as mounts. Elekk became sickly and corrupt as a result of Draenor's fel corruption and subsequent transformation into Outland.

Patient and strong, the elekk exemplify the draenei attitude towards the hardships of life. They can live to be over a hundred years old. It is said an elekk never forgets.