This article is using {{Card template}}.
See Help:Style guide/Card for how to edit this kind of article.
Edit this article
Auctionmaster Beardo
40605 • CFM_807
Regular 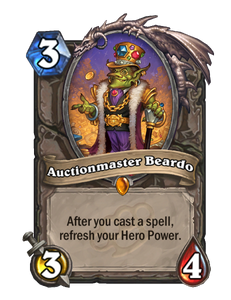 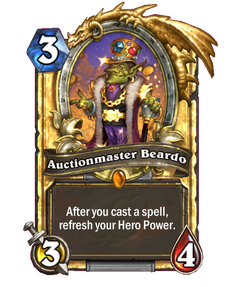 Gadgetzan has always run an under-the-table auction house, and business has been PRETTY good for Beardo since the population explosion. And since the explosion that destroyed the competing auction houses in the city. 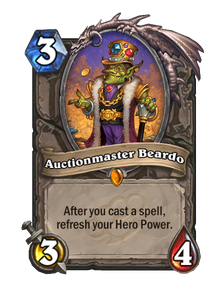 Auctionmaster Beardo is a legendary neutral minion card, from the Mean Streets of Gadgetzan set.

Auctionmaster Beardo's stats are good for his cost, and his effect allows for some Inspire-based strategy. Unfortunately, because you are usually still required to spend 2 Mana each time you use your Hero Power in addition to the cost of the spells to refresh it, his combo potential is limited. To increase the potential effect of Beardo, you can either try to reduce the cost of your spells by using cost reduction effects such as Emperor Thaurissan or Radiant Elemental, or to reduce the cost of the Hero Power through the effects of Maiden of the Lake , Raza the Chained, Tour Guide, or Waterboy. Lyra the Sunshard and Witch's Cauldron can help provide excess spells to trigger the ability.

Once he is on the board unanswered, he can become very powerful in conjunction with Hero cards or other upgraded hero powers. Particularly, Beardo enables one-turn-kill combos with Uther of the Ebon Blade, easily summoning The Four Horsemen in one turn.

It can be served as a alternative for Questline Hunter decks should their Defending the Dwarven District final reward is not played or destroyed due to tech cards from Dirty Rat or Mutanus, the Devourer , giving the exact same functionality as Tavish Battlecry would do and taking advantage of a 0 mana Hero Power.

Beardo appears to be the same character as Auctioneer Beardo, a goblin auctioneer found in the World of Warcraft version of Gadgetzan, but who has now seemingly acquired far more wealth and become world-renowned as an extremely experienced auctioneer.

The Gadgetzan Gazette Volume 32 #10 features a front page article titled "Does Beardo Really Have the Best Deals Anywhere?", which highlights how the Auctionmaster, who is described as "Gadgetzan's King of Bling" and "one of Azeroth's most experienced auctioneers" is to host a wealth seminar that "promises to change the way you buy and sell weapons, armor, trade goods, and more". Beardo is quoted as having said "I'll teach 'em how to stay on their toes so they aren't conned into bad deals or rackets. We'll help 'em learn the value of the market and when it's 'Time To Pay.'" The article states that a gnome who attended Beardo's seminar last month said that he doesn't have to roll need anymore, and is now able to contribute to his guild bank while still having enough gold left over for a vacation to Uldum. The article goes on to mention that Beardo has been called "a five-drop to be reckoned with" and a "one-goblin financial advice powerhouse" by the Stormwind Scryer. The article concludes by stating that the seminar is open to all factions and that ganking will not be tolerated.

Beardo is also mentioned in the "Population Soars, Business Roars" article on page 2 of the newspaper, where he is quoted as stating "Gadgetzan is good and ready to be competitive with Gnomeregan again" in response to Gadgetzan's growing population and the increase of commerce and competition.