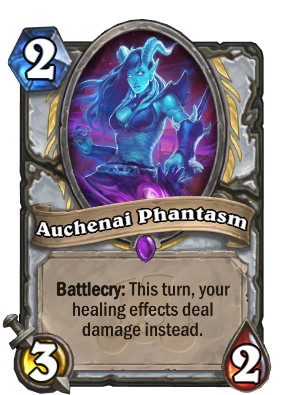 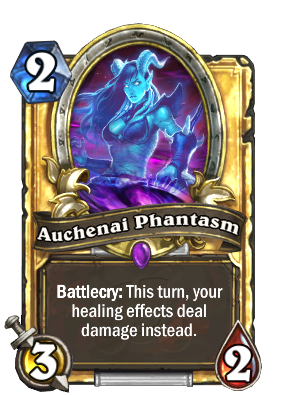 “Okay kids did everyone remember to heal before we left?”

Auchenai Phantasm is an epic priest minion card, from the Rastakhan's Rumble set.

Auchenai Phantasm can be obtained through Rastakhan's Rumble card packs, or through crafting.

The Auchenai [ˈɔːkənaɪ], pronounced "AW-ken-eye" were the original guardians of the draenei grave-city of Auchindoun in Terokkar Forest. They were called "death priests".

The Auchenai were a later addition to organizations under the Council of Exarchs, after Maladaar - at the time a member of the Sha'tari - discovered that D'ore's corpse was attracting the souls of draenei who died in the Genedar's crash and allowed the draenei to commune with them. Auchindoun was constructed and the Auchenai established to protect the dead.

During the Orcish campaign against their kin, the Auchenai fled into the tunnels of Auchindoun. Other draenei joined them later, seeking refuge from the Horde's onslaught; many of them died in the explosion triggered by the Shadow Council while freeing Murmur and other were lost later.

The Auchenai anchorite Nemuraan helped the Alliance Expedition to rescue Kurdran Wildhammer from the hands of the Horde. He revealed to Danath Trollbane that only a handful of Auchenai remained in the grave-city and that they would stay in Draenor as long as their dead lied there, for they would be tended.

Sadly, the Void energies emanating from D'ore turned mad this priory: they came to accept that Draenor was a dying world and that those who seek to restore it were mere fools. Thus, no longer believing that the dead should be left alone to rest, the Auchenai leader Exarch Maladaar started to experiment with necromancy. Many unsavory experiments were then undertaken in the Auchenai Crypts in the pursuit of a greater understanding of the necromantic arts. Many spirits were tortured or destroyed therein.

Auchenai Phantasm specifically appears to be a representation of the various draenei ghosts haunting the Auchenai Crypts in World of Warcraft, particularly the Phantasmal Possessors that can be summoned by their living brethren or the various "Phasing" draenei ghosts (such as Phasing Clerics and Phasing Soldiers) that roam the dungeon and periodically fade in and out of view.