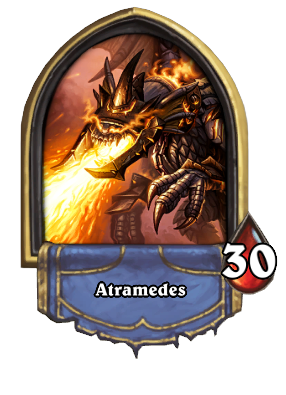 He's blind, so he'll rely on his hearing to locate you. Good thing his lair is lined with loud gongs!

For the Tavern Brawl minion of the same name, see Atramedes (Tavern Brawl).

Atramedes is a boss encounter found in the Blackrock Mountain adventure. It is the third encounter of the adventure's fifth and final wing, Hidden Laboratory. 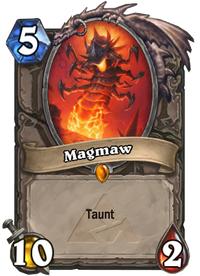 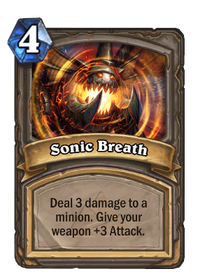 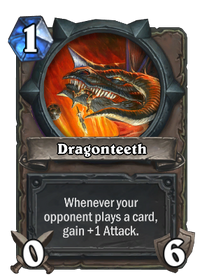 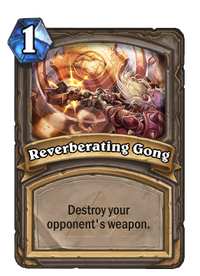 Atramedes' power is Echolocate, which equips him with a weapon that gains +1 Attack each time you play a card. At the start of your first turn you will gain 3 Reverberating Gong cards which can be used to destroy Atramedes' weapon. It is recommended to use these cards when his weapon reaches 6+ Attack. However, if you destroy his weapon, he will always equip a fresh one at the start of his next turn. Note: Using minions which destroy/disarm weaponry will work in your advantage.

The key difference between Normal and Heroic is that Echolocate costs 0 mana, and the player does not get any Reverberating Gong cards.

As with Normal mode, the key trick to the fight is to use effects which destroy Atramedes' weapon. Acidic Swamp Ooze, Harrison Jones, Sabotage and Blingtron 3000 are all effective ways of doing this. Once his weapon is destroyed, Atramedes will always equip a fresh one at the start of his turn.

The player must balance damage from Atramedes' weapon with the advantage of playing cards, and hope to have a weapon destroy effect available once the weapon's Attack gets dangerously high. Usually you will have to suffer some damage from the weapon, though, in order to spread out your weapon destroy effects. Note that it doesn't matter (Blingtron aside) at what point in the turn you destroy his weapon, since he won't gain a replacement until the next turn. However, if you're not destroying his weapon this turn, you should take great care to consider how many cards to play.

With these mechanics in mind, Atramedes is generally a fairly simple fight. Acquire a good supply of weapon destroy effects, and get busy defeating him before they run out.

An alternative and much simpler strategy is deploying Freeze effects from minions. Atramedes does only have one Taunt minion (with 2 health) and therefore a good supply of minions like Snowchugger or Water Elemental will make it impossible for Atramedes to ever regain board control, making it a breeze to defeat him on Heroic mode.

Kobold Stickyfinger can steal Dragonteeth, which is just as potent in the player's possession as it is for Atramedes - perhaps more so, as his AI will play cards as normal (thus freely buffing the weapon) and his deck has no weapon removal. 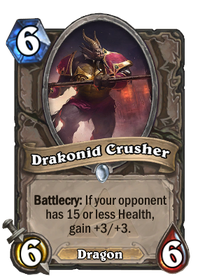 Nefarian
Atramedes may not be able to see you, but he can hear you snivel in fear.

Atramedes
I hear your heart beating.

Atramedes
Death waits in the darkness.

Atramedes
Yes, speak! I am closing in.

Atramedes
Your clumsy footsteps and foul stench give you away!

Atramedes
Ah. I hear you!
I hear footsteps.
I hear your heart beating. You cannot escape!

Atramedes
Aaah! That sound!
No! So close!
My EARS!

More mad experiments? It’s the Hidden Laboratory, so we don’t know what you were expecting, but yes. Atramedes was once a hapless Black Dragonwhelp, and Nefarian had him blinded with a toxic salve in a failed bid to give the dragon super-sight. Don’t feel too bad though, because he’s still super evil.[1]

"I have no need for eyes to see my enemies. Your clumsy footsteps and foul stench give you away!"

Atramedes is a large blind dragon boss in Blackwing Descent.

Atramedes, also known as Experiment 25463-D, was a black whelp experimented on by Maloriak to be granted "sight beyond sight." This experiment failed, however, and caused Atramedes to become blind. Rather than disposing of him, Nefarian decided to make further use of the blind whelp.

Atramedes, or Experiment 25463-D, is a failed attempt to bestow enhanced senses on a black dragon whelp. The toxic salve applied to the broodling robbed him of sight, forcing him to rely on sound and smell for survival. A tragic story... if Atramedes weren't so evil.