This article is using {{Card template}}.
See Help:Style guide/Card for how to edit this kind of article.
Edit this article
Astral Communion
2785 • AT_043
Regular 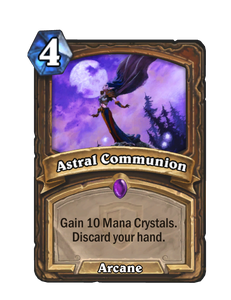 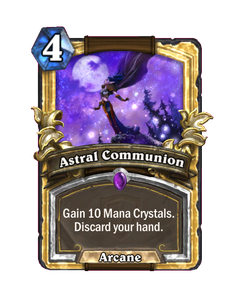 Hey! Moon! Can I have some mana crystals? 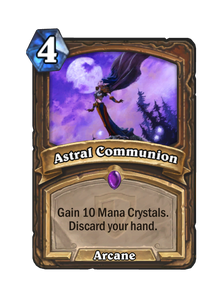 For the event version of this card, see Astral Communion (Event).

Astral Communion is an epic druid spell card, from the Grand Tournament set. 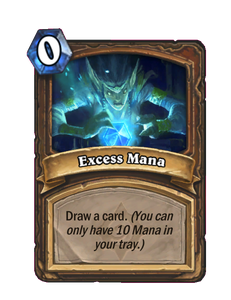 10 Mana Crystals are not going to be useful if you do not have any cards to play. Playing Astral Communion followed by triggering e.g. Acolyte of Pain, Cult Master or trading the Loot Hoarder you already have on the board is going to draw some cards. Astral Communion also triggers Gadgetzan Auctioneer. It is obviously best to empty your hand of any valuable cards before playing Astral Communion. If you add Maiden of the Lake and Justicar Trueheart into the mix, the combination is extremely powerful - and extremely unlikely.

Aim to get this in your starting hand with Innervates and The Coin, for a turn one play to get 10 mana. After that you can follow up with big minions and card draw to ramp your game in one or two moves, although this combo is very unlikely and will hardly see play.

While building a deck with Astral Communion can tempt including a lot of high-cost cards, a good idea would be to build a deck that can still keep up in case you don't pull this card early enough or if you're not willing to lose the cards in your hand. Making the right decision between playing Astral Communion or not can be a game-deciding factor.

Since playing this card will always result in having 10 mana to spend, it is probably wise to spend any spare mana available beforehand on playing as many cards as possible, and save Hero Power usage until after Astral Communion.

The negative effects can be negated through heavy card draws such as Octosari, Ultimate Infestation, or Overflow.

In World of Warcraft, Astral Communion is a Balance druid ability available at level 20.