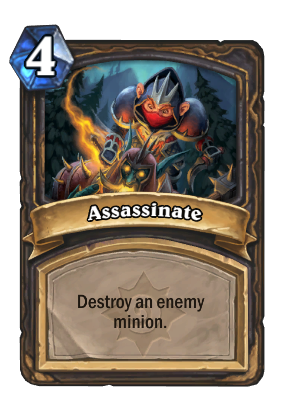 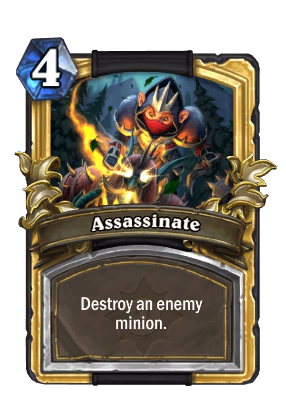 If you don't want to be assassinated, move to the Barrens and change your name. Good luck!

Assassinate is a rogue spell card, inducted into the Legacy set, formerly from the Basic set. 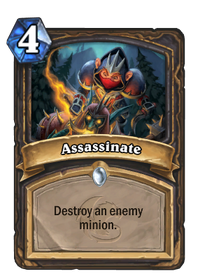 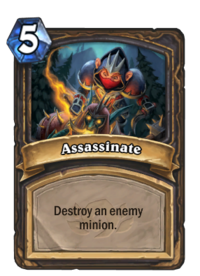 Two copies of regular and golden Assassinate are automatically given after the player completes the Ranked's New player experience system, unlocking Wild and Classic format.

Two copies of regular Assassinate (Core) are obtained for raising rogue to level 1.

Two copies of golden Assassinate (Core) are obtained for winning 50 games as rogue.

Assassinate (Core) is uncraftable and cannot be crafted or disenchanted.

Assassinate instantly destroys an enemy minion, no matter how durable it is. So it is best to keep it for a high health minion or a minion with important buffs or a Taunt in the way of dealing lethal damage. It is also effective against minions with high Attack since it removes the minion while avoiding taking damage.

While hard removal is a premium effect, this card's high cost and being just a spell makes it difficult to use in aggro or tempo decks. Vilespine Slayer or even Sap does a more efficient job in maintaining the board while moving a large minion out of the way.