This article is using {{Card template}}.
See Help:Style guide/Card for how to edit this kind of article.
Edit this article
Assassin's Blade
421 • CS2_080
Regular 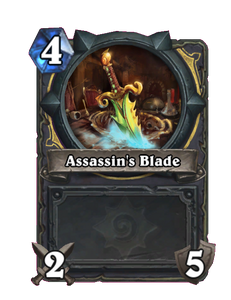 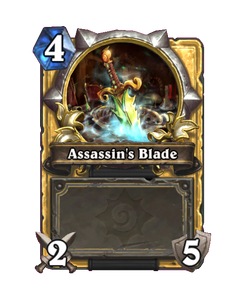 Guaranteed to have been owned by a real assassin. Certificate of authenticity included. 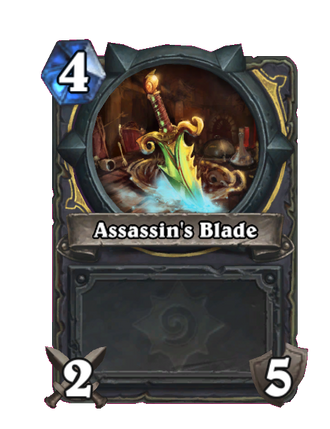 Assassin's Blade is a rogue weapon card, inducted into the Legacy set, formerly from the Basic set. 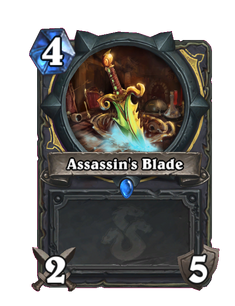 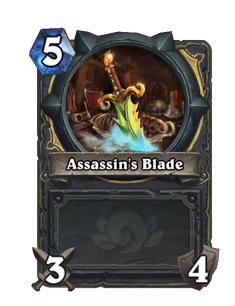 Regular and golden Assassin's Blade are uncraftable and cannot be crafted or disenchanted.

Assassin's Blade are obtained for raising rogue to level 4.

Assassin's Blade (Core) is uncraftable and cannot be crafted or disenchanted.

This weapon has the highest Durability of all Rogue weapons, but very low Attack for its cost. This makes weapon buffs like

Deadly Poison highly synergistic with this weapon by compensating for its low Attack value and extracting the most value out of them.

While efficient, its high cost can prove cumbersome, especially if you lack weapon buffing cards, while leaving itself more vulnerable to weapon-destroying effects. If you plan on playing faster and more aggressively, cheaper or higher attack weapons like

Self-Sharpening Sword can be considered instead.

Assassin's Blade is a one-handed dagger dropped from mobs in Shadowfang Keep. However, this weapon does not match that weapon's appearance, and likely simply references the obvious, a blade used by assassins or rogues.