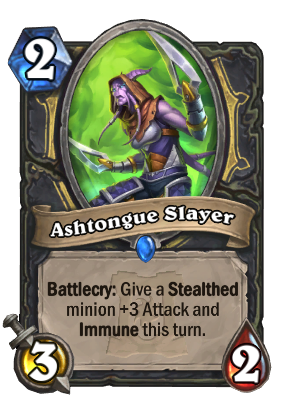 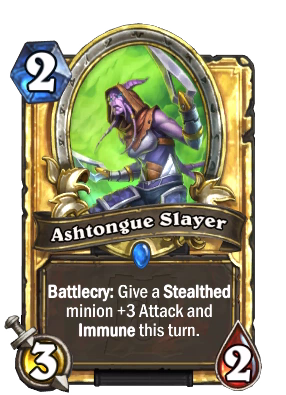 Uncollectible
Battlecry: Give a Stealthed minion +3 Attack and Immune this turn.
Flavor text

Her other hand attachments include a corkscrew and a bottle opener.

Ashtongue Slayer is a rare rogue minion card, from the Ashes of Outland set.

Ashtongue Slayer's Battlecry allows Stealthed minions such as Spymistress and Ravenholdt Assassin to trade with larger minions, or serve as a sudden source of burst damage if the opponent cannot remove them by means such as Flamestrike.

This Broken draenei is a member of the Ashtongue tribe.

The Ashtongue tribe, also known later as the Ashtongue Brotherhood, is a tribe of Broken draenei feared among all Broken. In Warcraft III, Akama's tribe had the appearance of Lost Ones. It consists of the most vicious and bloodthirsty individuals, handpicked by Akama himself.