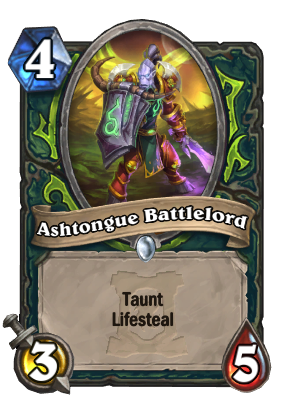 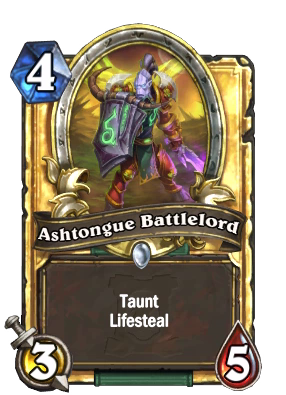 Demons have destroyed the lives of the Ashtongue draenei. Now he’s got a shoulder-axe to grind.

Ashtongue Battlelord is a common demon hunter minion card, from the Ashes of Outland set. 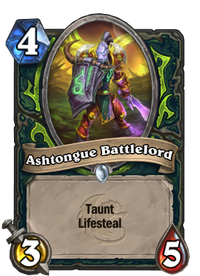 Ashtongue Battlelord can be obtained through Ashes of Outland card packs, through crafting, or as an Arena reward.

Ashtongue Battlelord (Core) is uncraftable and cannot be crafted or disenchanted.

A simple but sturdy Taunt that directly upgrades Sen'jin Shieldmasta. Midrange and control decks can use Ashtongue Battlelord to stabilize in the midgame against aggressive decks.

Ashtongue Battlelords are mobs that can be found in the Black Temple. They are elite warriors of the Ashtongue tribe.

The Ashtongue tribe, also known later as the Ashtongue Brotherhood, is a tribe of Broken draenei feared among all Broken. It consists of the most vicious and bloodthirsty individuals, handpicked by Akama himself. Akama relays his orders through Oronu the Elder. These orders include looting the Ruins of Baa'ri and further corrupting the environment of Shadowmoon Valley.