This article is using {{Card template}}.
See Help:Style guide/Card for how to edit this kind of article.
Edit this article
Arrogant Crusader
42462 • ICC_034
Regular 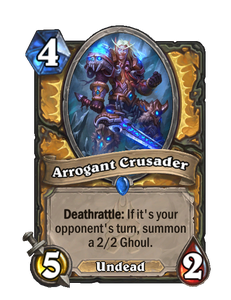 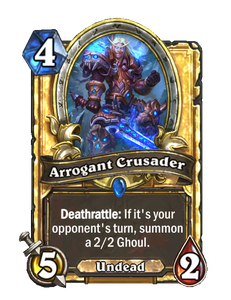 To be honest, he was kind of a jerk even BEFORE he was bitten by that ghoul. 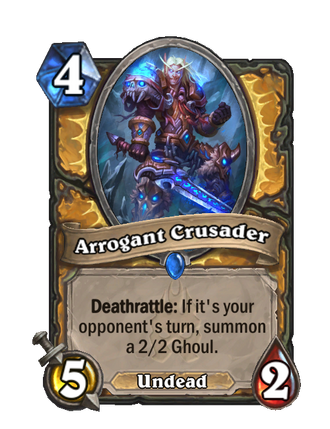 Arrogant Crusader is a rare paladin minion card, from the Knights of the Frozen Throne set. 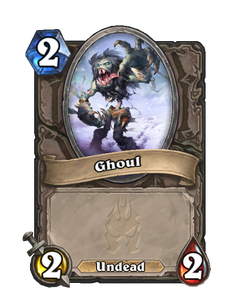 This minion's aggressive initial stats are abysmal, equivalent to the rarely seen

Ice Rager for one more mana. This card's edge comes from its sticky aftereffect, where your opponent might kill it to leave behind a 2/2. As a result, removing this from the board does not actually remove 5 attack, but only removes a net 3 attack unless they can kill the Ghoul as well.

Since this minion's full effect only happens if your opponent kills it, it synergizes well with Taunt and Buff cards which make this card more of a threat to kill.

When on the board, Arrogant Crusader is not useful for trading, since you will not receive the ghoul. Instead, Arrogant Crusader will provide a consistent 5 damage to the enemy hero until they deal with it, which characterizes this card as highly aggressive.

Overall, Arrogant Crusader isn't considered a powerful or strong card, since it is designed with an aggressive statline and Aggro Paladin has so many strong options already. The basic card

Truesilver Champion is often more preferable since it has an instant effect and is harder for opponents to deal with.

This card provides light insurance against

Doomsayer, since it leaves behind a 2/2 instead of nothing at all.