This article is using {{Card template}}.
See Help:Style guide/Card for how to edit this kind of article.
Edit this article
Armorsmith
596 • EX1_402
Regular 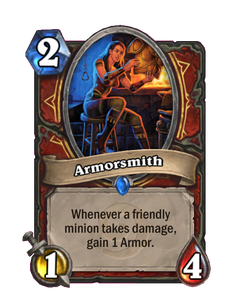 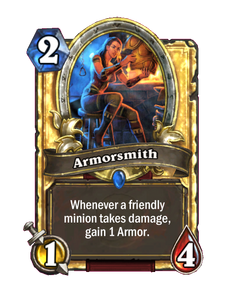 She accepts guild funds for repairs!

Armorsmith is a rare warrior minion card, inducted into the Legacy set, formerly from the Classic set. 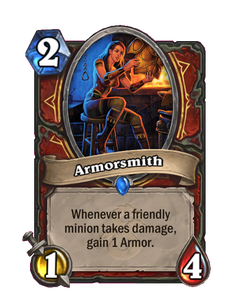 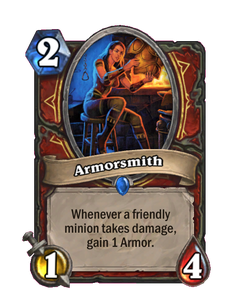 Two copies of regular Armorsmith (Core) are obtained for raising warrior to level 3.

Two copies of golden Armorsmith (Core) are obtained for winning 100 games as warrior.

Armorsmith (Core) is uncraftable and cannot be crafted or disenchanted.

This minion is very well suited to a defensive warrior deck. By using this minion alongside other minions that have a combination of high Health and Taunt, it allows the warrior to stack large amounts of Armor, which combines extremely well with Shield Slam.

The Armorsmith is a powerful card capable of contributing large amounts of Armor to the summoning hero. For this reason opponents will almost always want to remove her as quickly as possible. Summoning warriors should do their best to protect their Armorsmiths.

It goes without saying that having an Armorsmith in play greatly rewards the warrior for creating as much carnage as possible, making cards like Whirlwind a lot more desirable.

With the Alley Armorsmith, the armor gained by both cards can generate a huge amount of Armor, making the Armorsmiths even more useful if they protected well.

In control decks, this minion can be very powerful, granting Armor while being able to take out most 1-Health minions without dying itself.

If your opponent plays a Patron Warrior deck, at some point they will likely use a Whirlwind or two to summon more Grim Patrons. Armorsmith can serve as deterrent to this play, or provide some compensation by generating a good amount of Armor for you in the process.

Armorsmithing was one of two primary blacksmithing specializations (the other being Weaponsmithing) which allowed access to certain BoP armor recipes.

Diane Cannings is a level 75 Leatherworking Trainer inside her shop, the Legendary Leathers, within the Magus Commerce Exchange in Dalaran.