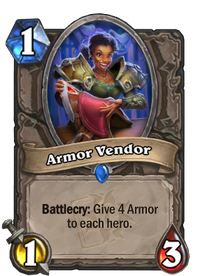 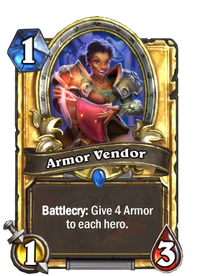 Battlecry: Give 4 Armor to each hero.

"You look like the kind of person that would buy three sets of armor. One to wear, a spare, and a spare for the spare."

Armor Vendor is a rare neutral minion card, from the Darkmoon Races mini-set.

Armor Vendor is very similar to Mistress of Mixtures, as a well-statted one drop that gives 4 health to each hero. As an upside, you gain the health immediately, and can benefit from the effect even while at full health. As a downside, the stats are distributed worse, you lose Deathrattle synergies, and you can't avoid giving the armor to your opponent. This is a great anti-aggro card, since Control and Midrange decks will often benefit from the extra health and board presence, where aggro decks don't care about their health total.

Warrior has extra synergy with this card, thanks to armor-related cards like Spiked Wheel, Ironclad, and Shield Slam.