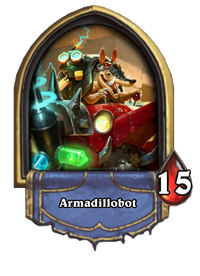 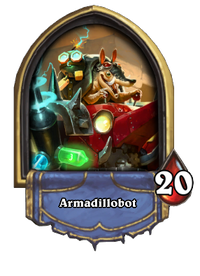 Is it insane to let a critter pilot a mech? Dr. Boom thinks not.

Armadillobot is a boss that can be encountered initially in Chapter 4 of Tombs of Terror. After completing Chapter 4, this boss encounter will be available in any completed chapter.

Armadillobot's hero power is a weaker, yet simular version of Dr. Boom, Mad Genius's Battlecry or Rattlegore's No Guts, No Glory, and the boss uses it quite rarely. The only minions that have major value from Mech "Pilot" are Vicious Scraphound and Eternium Rover on Normal and Heroic difficulty respectively. Since Armadillobot does not have Magnetic, healing, and lack of tools to survive for long, it is better to do not distract for trades and just rush to the enemy Hero.

Armadillobot is unique to Hearthstone. It belongs to League of E.V.I.L.