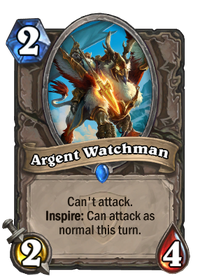 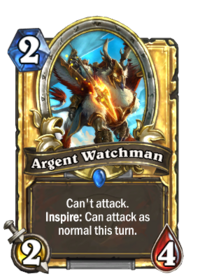 Can't attack. Inspire: Can attack as normal this turn.

Who argent watches the Argent Watchman?

Argent Watchman is a rare neutral minion card, from the Grand Tournament set.

Argent Watchman can be obtained through The Grand Tournament card packs, or through crafting.

Having decent stats but a disadvantage in attacking, it is still a strong minion in the early stages of the game, mostly in a deck that runs many other Inspire-minions. Playing this minion with The Coin on your first turn followed by the use of Hero Power on your second turn, gives you a powerful advantage.

Summon
I'm watching you.
Attack
I saw that.

Argent Watchmen are level 80 guards found around the Argent Tournament Grounds in Icecrown. They are riding on hippogryphs similar to the Argent Hippogryph.