This article is using {{Card template}}.
See Help:Style guide/Card for how to edit this kind of article.
Edit this article
Argent Squire
757 • EX1_008
Regular 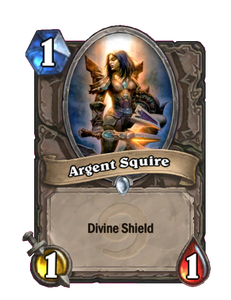 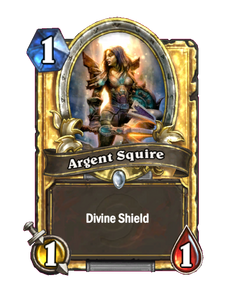 "I solemnly swear to uphold the Light, purge the world of darkness, and to eat only burritos." - The Argent Dawn Oath 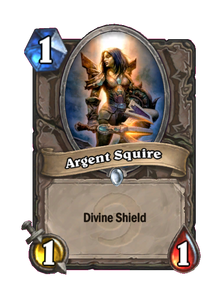 Argent Squire is a common neutral minion card, inducted into the Legacy set, formerly from the Classic set. 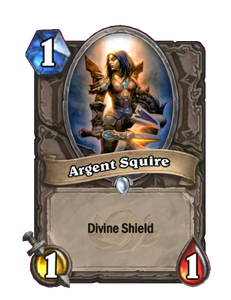 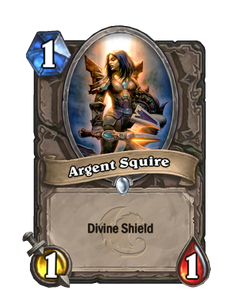 Two copies of regular Argent Squire are obtained for raising sum of all your class levels to 1.

Two copies of golden Argent Squire (Core) are obtained for winning 500 games across all classes.

Argent Squire (Core) is uncraftable and cannot be crafted or disenchanted.

Argent Squire's low mana cost and Divine Shield generally allow you to deal 2 damage for 1 mana, potentially killing 2 separate 1 hp minions in the early game. If played on turn 1 or 2, it is almost guaranteed to survive to the next turn, so one can plan to buff an Argent Squire reliably.

If you are playing a deck that makes use of Blood Knight, this card can potentially act as a +3/+3 buff for only 1 mana, leaving you with a 1/1 minion as a bonus.

Summon
The Light protects me.

Argent Squire may be related to a collectible companion of the same name from World of Warcraft.

Argent Squire is acquired when you become a Champion of your race during the Argent Tournament.

This item summons an Argent Squire which can carry the banner for any faction that the player has earned the right to Champion. When becoming champion of all races, you will be able to buy a mini horse for the squire, which will reward you with an achievement, and which will enable your squire to go to the shop, mailbox, or the bank for you, with a 4 hour cooldown. Handy for when you're in a dungeon and need materials for spells, or if you forgot that quest item in the bank.

The design for the squire, including an overstuffed backpack and a banner, may be an homage to the squires in the popular movie Monty Python and the Holy Grail.