This article is using {{Card template}}.
See Help:Style guide/Card for how to edit this kind of article.
Edit this article
Argent Protector
1022 • EX1_362
Regular 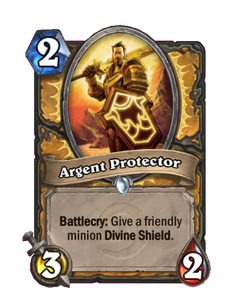 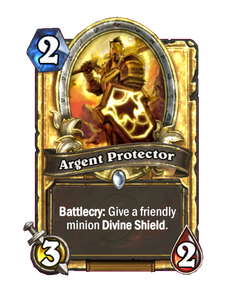 "I'm not saying you can dodge fireballs. I'm saying with this shield, you won't have to." 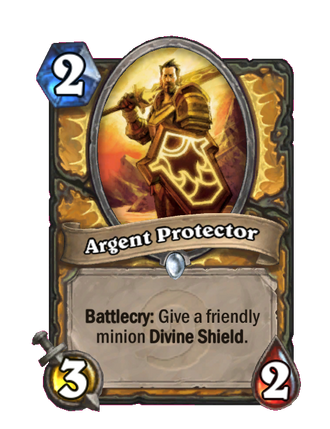 Argent Protector is a common paladin minion card, inducted into the Legacy set, formerly from the Classic set. 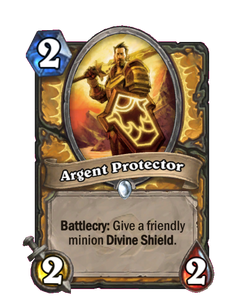 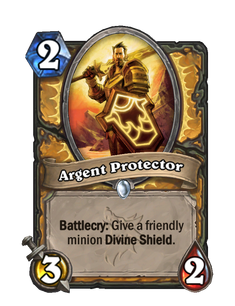 Argent Protector are obtained for raising paladin to level 1.

Argent Protector (Core) is uncraftable and cannot be crafted or disenchanted.

Argent Protector is very useful when used in conjunction with a hard hitting minion. Use Divine Shield on the minion and attack your opponent's strong minions. The Divine Shield will protect your minion from damage while your opponent's minion is damaged or destroyed. This is also very useful in conjunction with a Taunt minion. Cast Divine Shield on your Taunt minion to absorb any damage dealt to it and keep it alive, protecting you from damage.

Alternatively, this card is very useful in an aggressive paladin deck that consists of low cost, efficient creatures, of which Argent Protector is an excellent example.

It is generally considered a slightly better play to grant the Divine Shield to a minion that can make use of it that same turn, rather than allowing it to remain intact at the end of the turn. This is because when played and immediately consumed, you are dictating the use of the Divine Shield and are therefore in control of its effectiveness; while if left to the opponent it may be removed with a Silence or cheaply countered by means such as

Fireblast or a weak minion attack. However, when playing a key minion, Divine Shield can be very useful for protecting it from attack until the next turn.

The Argent Crusade is an order of holy warriors formed from the union of the reformed Order of the Silver Hand and the Argent Dawn. Led by the paladin

Tirion Fordring, the Argent Crusade was a major contributor to the successful campaign in Northrend that toppled the Lich King. As of the Shattering, they currently work to restore the Plaguelands of northern Lordaeron.