Edit
watch 02:52
Roblox: DeepWoken - The Loop
Do you like this video?
Play Sound
Argent Horserider
Regular 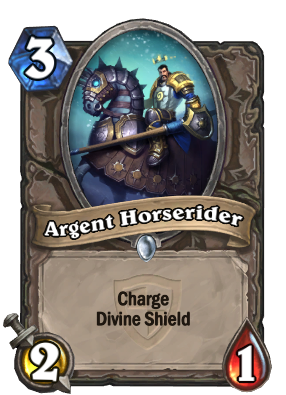 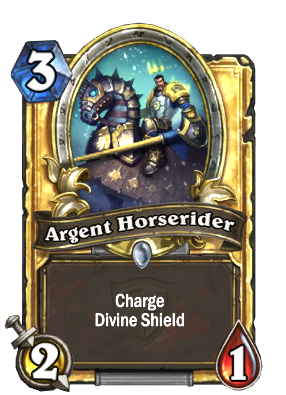 His horse's name is Betsy.

Argent Horserider is a common neutral minion card, from the Grand Tournament set.

Argent Horserider can be obtained through The Grand Tournament card packs, or through crafting.

A reasonable card for early game due to being able to use as removal for low Health minions while also keeping a 2/1 on the board afterwards. Since it can clear many 2 drops instantly, it is mostly useful to the player that played first, for example removing a Knife Juggler or a Fallen Hero played on the opponent's turn. A cheaper version of Argent Commander, providing half the stats at half the cost.

Unfortunately because of the Divine Shield and Charge it possesses, Argent Horserider has fairly weak stats for a 3 drop. Unless buffed, it will not be able to contest the board against sturdier early-game drops like Northshire Cleric, Amani Berserker, or even certain 1 mana cards such as Zombie Chow. However, use of Abusive Sergeant or Blessing of Kings will allow you to trade with minions with more Health points, that your opponent will not expect from the 2 Attack of Argent Horserider.

Argent Horserider can be useful in aggro decks as a form of sticky Charge damage.