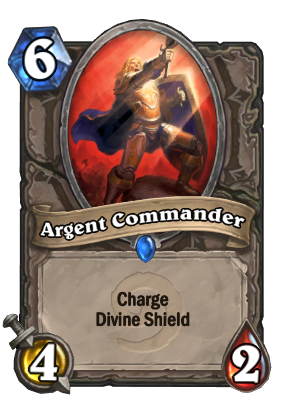 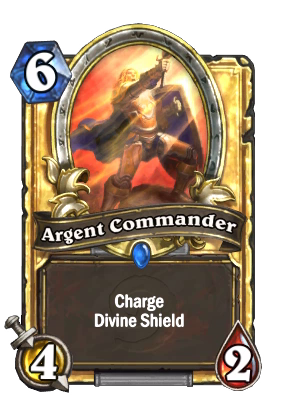 The Argent Dawn stands vigilant against the Scourge, as well as people who cut in line at coffee shops.

Argent Commander is a rare neutral minion card, inducted into the Legacy set, formerly from the Classic set.

Argent Commander can be obtained through Classic card packs, or through crafting.

This is one of two 6 mana minions with Charge available, the other being Reckless Rocketeer. This leaves you with the choice between 1 more Attack or Divine Shield. In most cases, Argent Commander is a better choice since Divine Shield makes it much more versatile and tempo-efficient. When played offensively, the opponent needs two sources of damage to destroy it without access to hard removal. It can also be played defensively to trade into another minion and leave a 4/2 on board.

Argent Horserider is a cheaper version of this card, boasting many of the same tactical qualities Argent Commander has, but can be played much earlier, making it a better pick for aggro decks. Evasive Wyrm is a better defensive version of the card, gaining an extra Attack, Evasive, and Dragon synergy in exchange for Charge. As a generic finisher, Leeroy Jenkins is better.

Argent Commanders can be found guarding the Frozen Halls of Icecrown Citadel alongside Ebon Blade Commanders.