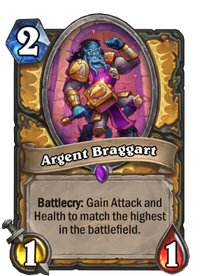 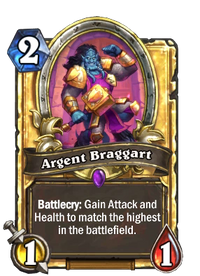 Battlecry: Gain Attack and Health to match the highest in the battlefield.

Not sure why he's bragging, he's got the same stats as the next guy.

Argent Braggart is an epic paladin minion card, from the Scholomance Academy set.

An efficient source of stats. Even getting something as minor as a 4/4 is incredible for 2 mana. You can save Argent Braggart to use after casting Blessing of Authority or Blessing of Kings, or playing a big minion like Libram of Hope to guarantee huge stats. Since this minion takes stats from either side of the field, things like an opponent's Magic Carpet can allow for a massive 6 health minion with solid attack early in the game. It's also a great response to a slow minion from your opponent, putting the same stats in play for much less mana.

Be cautious of Silence effects, particularly Earth Shock or Magehunter. Try not to use buffs on Argent Braggart, so a single Silence will be less devastating.