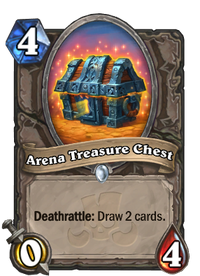 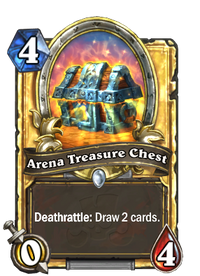 Yeah it's great, but did you see the Arena Treasure Arms?!

Arena Treasure Chest can be obtained through Rastakhan's Rumble card packs, or through crafting.

Arena Treasure Chest's 0 Attack for 4 mana represents a significant tempo loss when played, and as it only draws cards as a Deathrattle, activators or buffs are required to gain value from this card, making it quite slow. While the Deathrattle is useful, it's rather inefficient at 4 mana, and the sheer detriment to your board state makes Arena Treasure Chest a questionable choice. Loot Hoarder and Runic Egg are much more cost-efficient than this card, and in general, most classes have better card draw options; compare this card with Arcane Intellect, which draws 2 cards immediately for 1 less mana, or Branching Paths, which can draw immediately and has other potential effects.

In World of Warcraft, the Arena Treasure Chest is part of a special event that periodically occurs in the Gurubashi Arena. Every 3 hours, the goblin pirate captain Short John Mithril will appear at the center of the arena floor and leave the Arena Treasure Chest. The first player who successfully reaches and loots the chest (while fighting off or avoiding any nearby players trying to do the same) can reap various unique rewards, namely the upgradable Arena Master trinket, various wrist items, and Music Roll: Angelic.