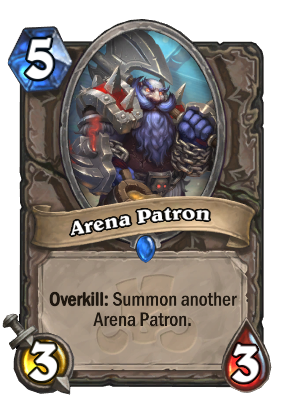 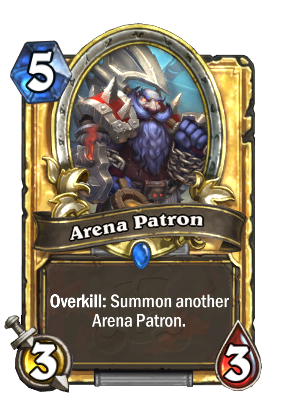 Everybody with a ticket get in here!

Arena Patron is a rare neutral minion card, from the Rastakhan's Rumble set.

Arena Patron can be obtained through Rastakhan's Rumble card packs, or through crafting.

Arena Patron, despite being nearly similar to Grim Patron of the old, is far more gimmicky and far less efficient than its bretheren. On top of its equally low stats, it needs to have a weak minion to kill while also requiring Rush to take immediate advantage of its effect, not to mention that in most cases you won't be able to gain more than one Arena Patron per turn to do the fact that Overkill effects are restricted to during your own turn. At best, it will require Houndmaster Shaw and many low health enemy minions to be able to fill your board with Arena Patrons.

In Arena, the same problems persist, but if you are able to play this minion without getting retaliated, it effectively acts like an "immortal" 3/3, as long as there is something with 2 or less health to kill on each turn.

Judging by his armor, this ornery Dark Iron dwarf appears to be a member of Akali's Rhinos.