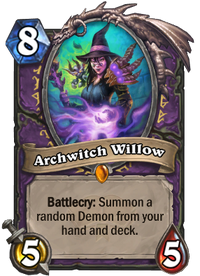 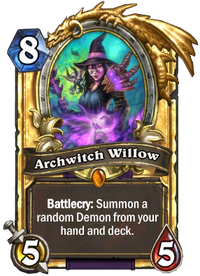 Battlecry: Summon a random Demon from your hand and deck.

One of the demons will do all the work while the other gets the same grade.

Archwitch Willow is a legendary warlock minion card, from the Scholomance Academy set.

Archwitch Willow can be obtained through Scholomance Academy card packs, through crafting, or as an Arena reward.

Willow's effect is quite strong, allowing players to pay just 8 mana for two demons- in most cases this will be stellar value. Currently in Standard there aren't many large demons Warlock wants to be cheating out, but there are a few like Fel Lord Betrug or Enhanced Dreadlord. You can also use Willow to summon smaller demons like Aranasi Broodmother and it would still be good value thanks to the fairly large body Willow provides alongside her effect.

Wild offers better demons for Warlock to use, like Mal'Ganis, Voidlord, or Doomguard. She also has great synergy with Bloodreaver Gul'dan - you can play her on turn 8-9 to pressure your opponent to clear your demons and then play Bloodreaver Gul'dan on turn 10 to revive them.

Archwitch Willow is unique to Hearthstone. Judging from her interactions during Duels, she is a teacher of dark magic with a biting wit, giving detention to students and readily insulting the other faculty at Scholomance Academy.

There is a Forsaken necromancer who shares her name, but the two are not intended to be the same character.[1]