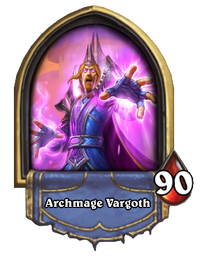 For the collectible card in Rise of Shadows set, see Archmage Vargoth.

Archmage Vargoth is a boss that can be encountered in Chapter 5 of The Dalaran Heist adventure. 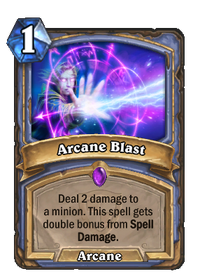 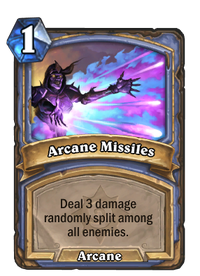 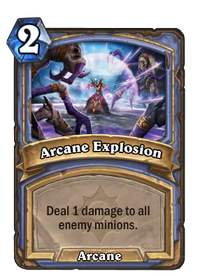 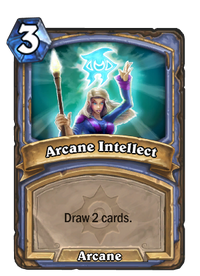 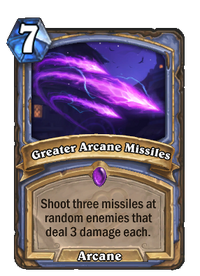 Vargoth specializes in using Spell Damage boosts to make his spells unbearable for you. Take out his Spell Damage minions as fast as possible to prevent them from boosting his spells. Be wary of Arcane Explosion, which can be devastating to your minions when combined with Spell Damage, even your big ones.

When Vargoth plays Aluneth, you have the option of waiting for him to mill out his entire deck and eventually defeating him with Fatigue damage, or at least getting his Health low enough for you to land the finishing blow. Combined with his Hero Power, which already adds cards to his hand, his hand can become full very quickly, potentially causing many good cards in his deck to be burned.

Fly-By is very useful at the stage where he plays Aluneth, because he faces the danger of drawing the Kadoom-Bot faster.

Arch-Villian Rafaam
Vargoth is a crafty mage. I suspect he hides cards in his sleeves.

Archmage Vargoth
Know that you babble at an Archmage of the Kirin Tor.

Archmage Vargoth
Arcane power, at a moment's notice.
I won't hold back.
Taste the power, of the Arcane!
This has always come easily to me.
This should do nicely.

Feel the might of the Kirin Tor!
Taste arcane power!

I represent the power of the Kirin Tor!

Ah, have you read one of my books?

What order do YOU represent?

We shall bring you down again, Malygos!

Kalecgos! Why have you turned against me?

Archmage Vargoth
Do you know how long it took for me to write these runes?
I could stand to come up with some new Arcane spells.
Why do frost mages get to have all of the fun?

Archmage Vargoth
Oh, you got SO far, too...

Archmage Vargoth is a level 70 quest giver located inside the Violet Tower in the contested territory of Netherstorm. Throughout most of the questline, he interacts with questers using a projection.